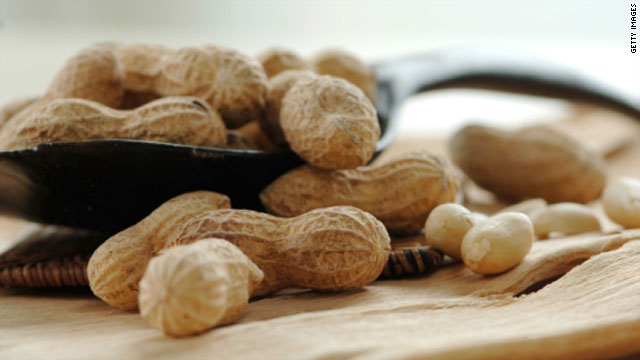 San Diego, California (CNN) -- Peanuts are like poison for people who have severe food allergies to them. For some, ingesting even a tiny piece of peanut can trigger a potentially fatal reaction.

But new research is showing that immunotherapy, a method of giving a small dose of peanut to a patient in a controlled setting and then increasing the amount over a few months, may help temper these reactions. It's the same principle as allergy shots, only done with food.

The research, conducted at Cambridge University Hospitals in the United Kingdom, was presented Friday at the annual meeting of the American Association for the Advancement of Science.

The Cambridge group will begin a randomized controlled trial next month with 104 children involved, similar to the peanut study done already, but with controls, said researcher Dr. Andrew Clark of Cambridge University Hospitals.

Some 30,000 Americans go to the emergency room each year because of severe food allergies, said Dr. Stefano Luccioli of the Food and Drug Administration's Office of Food Additive Safety. Food allergies affect about 4 percent of adults and 6 to 8 percent of children under 3, according to the Mayo Clinic.

Researchers took a group of 23 children allergic to peanuts and gave them small amounts of peanuts to eat daily, usually starting with 1 mg, said Clark. The peanut quantity was increased carefully every two weeks, until the children could eat about five peanuts.

They took this dose daily for at least six weeks, mostly tolerating it well except for some temporary mouth itching or abdominal pain, he said.

The results showed that 21 of the 23 children, or 91 percent, can safely eat at least five peanuts every day without any reaction. One of the children can get two peanuts a day, and one dropped out of the study. After six months, 19 of them could tolerate 12 peanuts at a time, and after one year, 15 participants could tolerate 32 peanuts. Participants said they didn't have to carefully read food labels or fear the allergy anymore, Clark said.

"This is very exciting, clearly, because here we have somebody who can have anaphylaxis and deadly reaction from trace amounts, and you're converting this person into somebody who can tolerate a significant amount of the food," said Dr. Anna Nowak-Wegrzyn, associate professor of pediatrics at Mount Sinai Medical Center in New York.

She was not involved in this study.

"I'm confident that within the next three to five years will we have a treatment that we can offer to our patients, which is not necessarily a cure," Nowak-Wegrzyn told CNN.

There is no benefit in delaying the introduction of common allergens such as milk and soy in children, and observational studies have suggested that early avoidance may actually increase the chance of developing allergies, experts said.

These kinds of studies are done under the strict supervision of professionals, with emergency medicine nearby in case of a severe reaction, experts said. This should not be tried at home.

The immunotherapy method, which Nowak-Wegrzyn called a "big advancement in the field," has also shown promise in a study by Duke University Medical Center and Arkansas Children's Hospital. Results presented in March 2009 showed that four of nine children allergic to peanuts could be taken off the therapy and eat peanuts freely after 2½ years of the therapy.

But there are many unknowns about this treatment, and it's not clear how permanent the state of desensitization is, she said, and this immunotherapy method is not a cure. Peanuts in particular are also tricky because, unlike with milk and eggs, children don't often outgrow their peanut allergies.

Giving small amounts of an allergen to modify the immune response is also the philosophy of allergy shots, which are commonly given for various kinds of pollen. The idea for using this for food allergies had been dismissed until about five or 10 years ago because of the side effects, Nowak-Wegrzyn said.

There is still risk involved in any kind of desensitization approach because it requires giving patients the very food that makes them react, she said. But the gradual buildup of allergens in Clark's study minimizes the risk, and the process is done in the hospital under strict supervision, she said.

Participants in immunotherapy studies have reported that they learned not to take their regulated allergen doses before exercising because it causes a faster absorption of proteins and can trigger a reaction, she said. Skipping doses can also be tricky, she said.

At Mount Sinai, researchers are exploring other approaches: One is changing the peanut proteins themselves for use in immunotherapy, with the goal of diminishing the risk of the adverse reaction during the treatment, Nowak-Wegrzyn said.

Another approach looks at antibodies called immunoglobulin E (IgE), which recognizes the offending allergenic proteins and is responsible for immediate reactions, including anaphylaxis. A treatment that has shown success in clinical trials works like a vacuum cleaner, removing all of the IgE from the bloodstream, she said. This has been approved for the treatment of asthma, and could also decrease the chance of reactions during immunotherapy for food allergies.

Other researchers at Mount Sinai have found Chinese herbal medicines successful in mice and are conducting trials on people with food allergies, she said.

Doctors have not found an explanation for why some people outgrow their food allergies and others do not, Nowak-Wegrzyn said. One theory is that as some children's immune systems mature, becoming more adult, the allergic response goes away. Also, the way that the immune system recognizes, or doesn't recognize, certain areas of proteins may play into to what extent a person can outgrow an allergy, she said. The peak times for outgrowing allergies are when a child hits school age and during the teenage years -- after college, it's unlikely, she said.

Because it's proteins that lead to reactions, technically a peanut has at least eight major food allergens, explaining why people with peanut allergies will have varying reactions, said the FDA's Luccioli.

Allergy tests are also imperfect, with some people testing positive to foods to which they don't really react, and cannot estimate the severity of reaction to any of these foods.

People with allergies must carefully read food product labels. The FDA enforces a law that requires food labels to state clearly whether a major allergen -- milk, eggs, peanuts, tree nuts, soybeans, wheat, fish and Crustacean shellfish -- are in a product, but does not govern statements such as "may contain traces of peanuts."

A better standard of what these labels mean -- for instance, the difference between "made in a facility that also processes nuts" and "may contain traces of nuts" -- would be helpful, Nowak-Wegrzyn said.