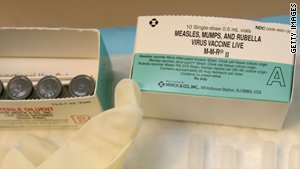 Health officials in New York and New Jersey are urging those in the affected communities to get vaccinated.
STORY HIGHLIGHTS
RELATED TOPICS

In Thursday's Morbidity and Mortality Weekly Report, the Centers for Disease Control and Prevention (CDC) reports 1,521 mumps cases, using data collected before end of January. But CNN has learned that the number is now at least 1,996.

CDC officials trace the origin of this outbreak to a summer camp for Orthodox Jewish boys in Sullivan County, New York, last June. That's when an 11-year-old boy arrived at the camp after having spent time in the United Kingdom, which has been dealing with its own mumps outbreak -- it saw about 7,400 cases last year.

Health officials say that boy -- referred to as the "index case" -- infected others attending the summer camp. After leaving the camp, they then transmitted the illness to their communities when they returned home.

Both the CDC and health officials in New York and New Jersey say the outbreak is still primarily confined to specific religious communities in their states. "Much of the current outbreak is occurring in congregate settings, where prolonged, close contact among persons might be facilitating transmission," CDC officials say in the weekly report.

Health officials say they believe there are several reasons why this outbreak is confined to these religious communities. One is that young men in particular are spending many hours in school, "often face-to-face with a study partner," according to the CDC's weekly report. It is likely community transmission also occurs within large families.

Mumps is spread by people sneezing or coughing, sending the virus-laden droplets through the air. People can also get infected by touching surfaces that a sick person has touched. Once infected, someone can transmit the virus for a day or two before showing any symptoms of the illness and for up to five days after symptoms appear, according to the CDC.

Health officials note that lack of vaccination is not to blame in this mumps outbreak, which is the largest since 2006, when 6,584 were in an outbreak that originated on a college campus.

"This is a well-vaccinated community," said Zucker from New York City's health department.

But the vaccine isn't 100 percent effective. Vanderbilt University's Dr. William Schaffner, who also is president-elect of the National Foundation for Infectious Diseases, says studies have shown that the mumps vaccine is about 85 percent effective.

Children are supposed to receive their first mumps vaccine when they are 12 to 15 months old, and then get a second shot when they are 4 to 6 years old, according to the CDC.

The CDC notes in the weekly report that this outbreak shows that mumps can occur in highly vaccinated populations. However, Schaffner added that the mumps vaccine "is not perfect but considerably effective, and if someone gets the mumps even though they've been immunized, the symptoms will be milder."

That is why health officials in both states are urging those in the affected communities to get vaccinated.