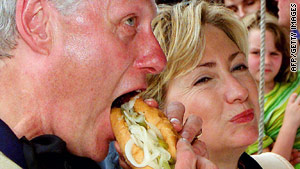 "While he eats a lot better than he used to," he still indulges, one friend tells CNN.
STORY HIGHLIGHTS

(CNN) -- Though Bill Clinton has received lots of attention for getting healthy since his 2004 heart surgery -- losing weight, exercising more, improving his diet -- associates of the former president Thursday stressed that Clinton continues to live at a breakneck pace and raised questions about the extent of his lifestyle changes.

"While he eats a lot better than he used to," one friend tells CNN, "he certainly indulges every once in a while consistent with past behavior -- [for example] fries with his fish."

"He still works long days and stays up very, very late," the friend said. "He has gone from a frenetic pace to what most people would consider a frenetic pace. He's approaching Social Security, and he's living a life not that different from his 30s."

After undergoing quadruple bypass operation on four blocked arteries in 2004, word spread that Clinton had reformed the lifestyle that was immortalized in "Saturday Night Live" skits about the then-president jogging to McDonald's.

When Clinton left the White House, his cholesterol level was 233, well above the recommended upper threshold of 200. And his so-called bad cholesterol jumped 40 points during his final year in office, to around 177 -- about 50 points above normal.

After his surgery, Clinton stepped up his advocacy for fighting obesity. In 2005, he announced he was partnering with the American Heart Association to fight rising childhood obesity rates.

The following year, he appeared before the National Governors Association to urge state executives to fight rising obesity rates, mentioning his McDonald's habit and wishing out loud for the fast-food chain's french fries to be cooked in olive oil.

Even while crusading against obesity and appearing trimmer than in his White House days, however, Clinton has shied away from discussing lifestyle reforms since his surgery.

"I ate a lot of stuff that was high in fat. ... I ate a lot of it," the former president told CNN's chief medical correspondent, Dr. Sanjay Gupta, as he described his life before surgery in a 2005 interview. "And you know, I just didn't think about it. And I didn't have regular exercise."

But Clinton has avoided giving details about his post-surgery diet and exercise routine.

Friends say Clinton introduced healthier foods to his diet but hasn't written off fries and steaks entirely. And they stressed that his schedule is as nonstop as ever, with the president frequently skipping sleep until his next plane trip.

"[The] whole time I have known him -- goes back 20 years -- he's led a hectic life," said former Clinton adviser and CNN analyst David Gergen. "[There] ought to be two Bill Clintons in order to keep up the pace he does. I think it has been especially relentless in the last few months."

Clinton's role as the United Nations special envoy for Haiti has taken him twice to the earthquake-ravaged nation and he is leading efforts to raise money for the hard-hit area.

While keeping mostly mum on lifestyle changes, Clinton has opened up about his lifelong struggle with weight since undergoing surgery. In announcing the American Heart Association partnership in 2005, for instance, Clinton disclosed that he weighed 210 pounds by the time he was 15.

"I was probably in the last generation of Americans where people widely thought a fat baby was a healthy baby," Clinton told CNN's Gupta. "I always battled my weight, all of the way through school."

In a series of 2007 ads for Hillary Clinton's presidential campaign, Clinton poked fun at his weight struggles. One spot showed the former president daydreaming about a cheese burger while running on a treadmill. "Exercising is hard," a voice in the ad said, comparing it to the ease of attending an Iowa caucus.

CNN's Dan Gilgoff and Jessica Yellin contributed to this report.