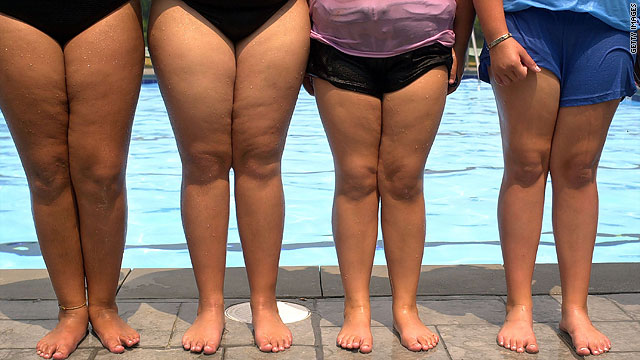 Talking to youngsters about diet and fitness can be difficult, because parents don't want their kids to have self-esteem issues.
STORY HIGHLIGHTS

Michelle Obama brings the campaign against childhood obesity to "Larry King Live" at 9 p.m. ET Tuesday. Send us your questions for the first lady at CNN.com/LarryKing.

(CNN) -- It's an uneasy topic when moms discuss their daughters' weight.

It's no different for the first lady.

When Michelle Obama mentioned her daughters' weight once had gotten "off balance" in speeches about childhood obesity, she came under criticism from parenting bloggers and anti-eating-disorder activists. They said the first lady inadvertently brought attention to her two young daughters' weight when they are at a sensitive age.

Obama's mention of her girls in this context raised an issue many parents may confront. When parents become aware of a possible health problem related to their children's weight, how can they address the problem without causing self-esteem issues for youngsters?

It's better to address a weight problem with children directly rather than pretending it doesn't exist, said Dr. Tom Robinson, the director of the Center for Healthy Weight at the Stanford University School of Medicine.

"In our experience, obese children know that they are heavy. They may compare themselves with their peers or kids they see in the media and, not infrequently, they may have been teased about their weight," he said.

Parents should have an open dialogue with their children and assure them they are loved regardless of weight, he said.

Obama on Tuesday is unveiling more details of a nationwide campaign tackling childhood obesity. Although her discussion of her daughters sparked controversy, observers say Obama had good intentions by personalizing a glaring public health problem.

"Probably what she was doing was making people realize she's saying this as a mother, that she has faced this issue," said Marilyn Tanner-Blasiar, a spokeswoman for the American Dietetic Association. "She was bringing it home, but it was perceived the wrong way. It's a delicate issue, and being honest about it is important, but you have to be careful, because kids listen.

"They become on high alert when the topic is about them even though they act like they are not listening. They will overhear. If it's going to be hurtful to them or harm them, you don't want to go there," said Tanner-Blasiar, who works with children.

Obama talked about how at one point, the family's pediatrician "warned that he was concerned that something was getting off balance" with her children's body mass index, in a January 28 speech in Alexandria, Virginia.

She said the family addressed the issue with small changes: Daughters Malia and Sasha drank water instead of sugary drinks, low-fat milk instead of whole milk and reduced their TV time.

Blogger Jeanne Sager questioned the effect Obama's comments might have on the girls. Sager wrote on a Strollerderby blog: "Their mother is trying for the greater good, but she's taken an extremely touchy subject out into the open.

"They are being raised in front of everybody. There are some things that should be kept private," said Sager, who battled bulimia as a teenager.

Dr. Ovidio Bermudez, the medical director of the Eating Disorders Program at Laureate Psychiatric Clinic and Hospital in Tulsa, Oklahoma, said weight matters are usually a sensitive subject and should be discussed within the family.

"Imagine if a child is losing their hair," he said. "That's something that would be addressed in a private fashion with a lot of sensitivity for their emotions and their implications. It's the same thing addressing weight. You have to be really careful that you don't take something so tightly close to emotion [and put it] into the public eye. These things need to be dealt [with] as private matters."

Focus on health, not weight
Compliment your children on lifestyle behaviors like "Great snack choice" or "You really run fast" rather than on the loss of a pound or two, said Tanner-Blasiar, a registered dietitian.

Be a partner in health, not the police officer
It doesn't work if a parent hovers and monitors what the child eats and his or her activities. Parents can improve the whole family's health by not buying junk food, sugary drinks, avoiding fast foods and planning weekend activities for the entire family. Not being the police does not mean children get a free-for-all. Parents need to set firm limits, Robinson said.

Treat children equally
Even if one of your kids has issues related to obesity and another doesn't, make sure one isn't getting a cookie and the other is getting a stalk of broccoli. The disparity in treatment breeds resentment and negativity, experts said.

Create an open environment to discuss issues
Sudden fluctuations in weight may have nothing to do with food. The child could have emotional issues that trigger eating disorders, said Lynn Grefe, chief executive officer at the National Eating Disorders Association.

Move
Don't just talk about eating right and exercising. Lead by example by making lifestyle changes as a family. Turn off TVs and computers. Look for ways to spend fun, active time together.

Here are things to avoid:

Don't play the blame game
Avoid yelling, bribing, threatening or punishing children about weight, food or physical activity. These issues can turn into parent-child battlegrounds that breed shame and anger. The worse children feel about their weight, the more likely they are to overeat or develop an eating disorder.

Don't label your children
Some parents give labels to their children. Tanner-Blasiar said she runs into families who label their children as the slow, fast, skinny or fat one. Be careful, she said, because sometimes kids "live up to their labels."

Don't criminalize the cupcake
An occasional treat is OK, as long as treats are eaten in moderation. Making something forbidden tends to have unintended effects.

Don't disparage your own weight
Kids are always listening and internalizing what their parents say and do. Parents who belittle themselves and their own figures inadvertently could pass that on to their children.

Avoid the f-word
Getting to a healthy weight is not about becoming skinnier or prettier. Emphasize health over appearances.