(CNN) -- For more than 20 years, former San Francisco 49ers lineman George Visger has lived his life out of hundreds of small yellow notebooks. In them he scrawls the minutiae of his daily life: "4:45 am left house. 2 stops to find coffee and a roll. Paper work till 9:25. 10:05 Ed called."

The notebooks are the last vestige of his memory.

"I always have them. They sit in my back pockets," said Visger, 51. "The movie '50 First Dates,' this has been my life for 28 years. I get up in the morning and I have no clue what I have to do that day. If it's not written down it doesn't exist."

Visger said his memory began fading in 1982. During his brief, injury-shortened career playing for the 49ers, he said, a jarring tackle caused a concussion.

"I went into a coma and almost died," said Visger. "At one point I was given last rites."

It was the culmination of a life using his head -- to tackle -- that almost killed Visger. His is one of several cases of ex-NFL athletes struggling with memory loss, depression and sudden, frightening bouts of rage. Experts believe the reason for the brain damage is concussion.

Visger said he believes he had hundreds, maybe even thousands, of concussions from Pop Warner to the pros.

Scientists have spent years explaining the symptoms Visger and others suffer by examining the brains of athletes after they die, but methods for detecting concussion in living athletes are becoming more sophisticated.

At the University of North Carolina, Chapel Hill, Kevin Guskiewicz is leading a study of 3,000 ex-NFL players. A small fraction of those players have undergone imaging technology to peer deep into the brain, down to the nerve cells, to try to explain their cognitive problems.

The technique is called diffusion tensor imaging. It is a measurement of how well neurons, the brain's information messengers, are connected to one another in the brain. If the neurons travel unfettered, it indicates a healthy brain. When the flow is disrupted, it may indicate damage. 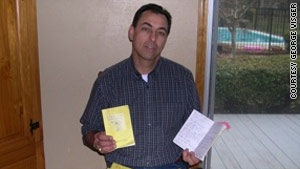 George Visger uses these notebooks to help himself remember basic things every day.

"We look for regions where there may be deranged or disrupted fibers," said Guskiewicz, the research director at the Center for the Study of Retired Athletes at UNC Chapel Hill. "We are led to believe that in regions where that's occurring, there may be swelling, there may be scar tissue. That piece we don't know yet, but what we're finding in these retired pro football players, especially those with high concussion history, is they tend to have these problems of connectivity."

The regions that appear to be most disrupted in the 41 retired players studied thus far are the same regions that are damaged in early Alzheimer's disease patients.

In a previous study, Guskiewicz and colleagues found that retired NFL players with a history of three or more concussions are more likely to experience clinical depression and mild cognitive impairment, which is an early hallmark of Alzheimer's disease.

Visger is afraid of more than mild cognitive impairment. He fears that he is on the same grim path traveled by several other ex-NFL athletes.

"I have felt myself slipping, getting worse year to year," said Visger, who has had nine brain surgeries since his concussion in 1982. "I'm terrified. Guys are committing suicide left and right and I am starting to go down the same path some of these guys are going down. [Former Pittsburgh Steelers player] Mike Webster was living homeless in car. He died a horrible death."

A growing chorus of ex-players have said they believe that the NFL is not doing enough to address concussion, and during recent hearings, Congress joined that chorus.

Ex-players' anger -- and fear -- is bolstered by evidence emerging from posthumous studies of athletes' brains. They reveal brown tangles peppered throughout the brain tissue of former NFL players. Experts say the tangles, called chronic traumatic encephalopathy or CTE and found in players as young as in the 30s or 40s, resemble what might be found in the brain of an 80-year-old with dementia.

The NFL has refuted scientific studies revealing brain damage in ex-players, until recently.

"One rose does not make a summer," said Dr. Joseph Maroon, neurosurgeon for the Pittsburgh Steelers and a longtime member of the NFL's medical committee on concussions. "Initially there were a couple of isolated case reports suggesting this may be a significant problem for football akin to boxing. More recently these observations have been confirmed. The NFL is saying we never denied the validity of the initial reports but we need more data. If there is a problem here we want to know about it, too."

Maroon stressed the NFL's recent policy shift, including more education for players, coaches and trainers, stricter return-to-play guidelines, and possible penalties for players who use their heads to hit or tackle. The league is also funding independent research into CTE.

In the meantime, Guskiewicz and colleagues are studying ways to slow down the progression of early brain damage they are finding in ex-athletes. They are testing the theory that omega-3 fatty acids, found in products such as fish oil supplements, could prevent or slow down the ravages of CTE in the brain.

Visger, who is not involved in the UNC Chapel Hill study, has tried fish oil supplements with some success.

His rage and depression have abated -- a little -- but his family life is crumbling under the weight of his depression and rage.

"I'm just so damn frustrated. [My condition] spills over into my relationship with my wife, kids," said Visger. "I would do anything it takes to get relationship back with my wife and family."