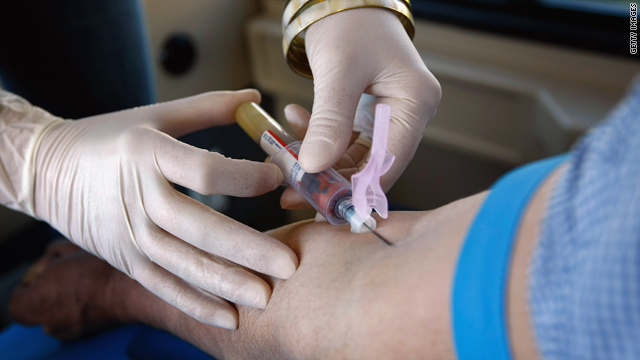 With a blood test, doctors may one day treat rheumatoid arthritis before it starts to take a toll on the patient.
STORY HIGHLIGHTS
RELATED TOPICS

(Health.com) -- A simple blood test may allow doctors to identify a debilitating form of arthritis years before any symptoms appear, which may help to stop the disease in its tracks, new research suggests.

Rheumatoid arthritis (RA), which affects an estimated 1.3 million Americans, is an autoimmune disease that attacks the joints, causing inflammation, pain, and swelling. Early diagnosis and treatment are key to preventing long-term joint damage, but the warning signs of rheumatoid arthritis are often easily confused with those of other diseases and conditions.

Now, a new study reports that markers of inflammation that can be detected in the bloodstream rise long before symptoms of the disease. This finding holds out the possibility that doctors can one day treat rheumatoid arthritis before it starts to take a toll on the patient. Treating rheumatoid arthritis early and aggressively with a combination of drugs provides the best odds of preventing joint damage.

The study "moves the whole field along," says rheumatologist Dr. Lionel Ivashkiv, M.D., an associate chief scientific officer at the Hospital for Special Surgery, in New York City. "In the future, in combination with other tests and risk factors--such as genetics, smoking, and family history--we can maybe predict who is at high risk for developing RA."

In the new study, which appears in the February issue of Arthritis & Rheumatism, researchers in Sweden analyzed the blood samples of 342 people, 86 of whom went on to develop rheumatoid arthritis up to five years after giving blood. Overall, the people who ultimately developed rheumatoid arthritis had higher levels of proteins and other substances involved in inflammation in their blood compared to those who didn't develop the disease.

Rheumatoid arthritis drugs target some of the inflammatory markers that were elevated, such as tumor necrosis factor (TNF).

When all 30 of the markers that the researchers measured are taken into account, the test would correctly predict 86 percent of the time the individuals who would ultimately develop rheumatoid arthritis, according to the study.

"When a patient with RA comes in now, their immune system is on fire," says Dr. Richard Keating, M.D., a professor of rheumatology at the University of Chicago. "The researchers are working backwards and trying to figure out what started the fire. This will help unlock the pathway involved in how this disease occurs, and may open up new early treatment opportunities."

Dr. Eric Matteson, M.D., the chairman of the rheumatology department at the Mayo Clinic College of Medicine, in Rochester, Minnesota, calls the new findings "a step in the right direction," but says that it is premature to conclude that a blood test can predict who will develop rheumatoid arthritis with any degree of certainty.

Many of the inflammatory markers measured in the study are not specific to rheumatoid arthritis, Matteson points out. They reflect "general immune system activation," he explains, and could indicate a host of other inflammatory autoimmune diseases (such as lupus or psoriasis), or even a viral infection.

Still, he says, "It is exciting to think that...we could be alerted to the fact that [people] may go on to develop RA or another autoimmune disease."

Health.com: How I conquered rheumatoid arthritis

Blood tests that accurately identify the warning signs of rheumatoid arthritis could eventually help doctors tailor treatment plans to individual patients, Matteson adds. If researchers are able to pinpoint the blood markers of rheumatoid arthritis, doctors could use that information to assess the severity of individual cases and predict which medications are likely to be most effective for which patients, he says. (This approach is already used to treat other diseases, including some types of cancer.)

However, Ivashkiv stresses, the blood testing used in the study is not likely to be used by arthritis doctors in the near term. "It is another way of trying to identify patients with early RA, but it is not practical yet," he says.