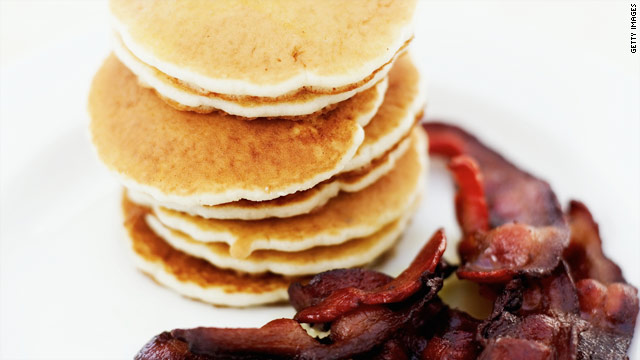 Most of us know there's a good chance we'll have enough to eat next month, says an expert, but rational thought is frequently overruled by the limbic system's "me, now" imperative.
STORY HIGHLIGHTS

(CookingLight.com) -- Among all the ways to change your diet for the better, portion control sounds like the one thought up by a pocket-protector-wearing nutrition nerd patrolling the school cafeteria. To be portion-preoccupied means to be tyrannized by food scales and little tape measures: Is this chicken breast bigger than a pack of cards? Portion policing runs against the ideal of a relaxed, balanced, real-world diet in which healthy food choices bring satisfaction without too much worry about quantity.

But the man whose research introduced the world to the 100-calorie snack pack -- now a multimillion-dollar slice of the food market -- begs to differ. To Cornell University food psychologist Brian Wansink, Ph.D., portion awareness is the key to making sure that more of the 200 food choices we make each day are closer to what our thinking brain -- as opposed to our instinctive brain -- would like.

The cards are stacked against most Americans. Our bodies think we're still hunter-gatherers threatened by imminent famine at the end of every season -- even as we drive the minivan to Costco. Our supermarkets offer tens of thousands of products, often sold in packages that could feed a small nomadic tribe.

"When it comes to portion control, you can count on your brain not being very interested and your body not being very well calibrated," Wansink says. Result: We often overeat in 100-or 200-calorie increments, which over time adds up to a weight gain that seems like a mystery to the eater. And here's the rub, according to Wansink: Most of us know what we're supposed to eat, and how much of it. We just ignore what we know. We eat, he says, "mindlessly."

Everybody knows you're supposed to eat an apple instead of a candy bar, but it's not going to happen without help.
--Brian Wansink, Ph.D., food psychologist
RELATED TOPICS

"People think education and awareness are the answer to a better diet, but they're not," Wansink says. Consider even the simplest dietary "rules": More than a fifth of Americans probably know we're supposed to eat two to four servings of fruit each day, but only about 20 percent actually do it. We fail in part, Wansink says, because we're bombarded by subtle and not-so-subtle cues that trigger instinctive as opposed to conscious eating behavior. Much as behavioral science is used to explain why Americans make illogical decisions about money, Wansink specializes in what could be called behavioral home economics. Since founding The Food and Brand lab in 1992, he has designed and conducted nearly 300 studies of the prominent role persuaders play in eating habits.

Two brain systems govern the decision to snack on an apple versus a big bag of cheese curls. The limbic system is subconscious, emotional, and more likely to bet on present opportunity than weigh future consequences; it does the evolutionary job of protecting us against the future unknown. The analytic system weighs courses of action more consciously. Most of us know there's a good chance we'll have enough to eat next month, but rational thought is frequently overruled by the limbic system's "me, now" imperative. We are products of both systems, plus all sorts of cultural influences to boot.

Wansink specializes in simple yet dramatic experiments that show how unreliable our rational brains are against the instinctive urge to eat. Even dumb-sounding tricks can fool us into misreading our appetites, our satiation. In one experiment, Wansink compared the behavior of subjects spooning soup from regular bowls to those eating from bowls rigged with feeder tubes that kept the level of soup constant. Even though the bottomless-bowl subjects ate 73 percent more soup, they rated their feelings of fullness the same as those who'd consumed about 9 ounces from the ordinary bowls.

Now consider how available food is in our candy-store society. Pointedly, Wansink has shown that a person dips into a candy bowl 71 percent more often if candy is on a desk rather than in a desk drawer. Consider how distracted we often are when we eat: Subjects who ate while watching television consumed nearly 30 percent more food in a Wansink study. Consider, too, the sheer enthusiasm food sellers muster: Another Wansink study showed that subjects were 27 percent more likely to order "Triple-Chocolate Black Forest Volcano Cake," compared to the same cake if it were called, simply, "chocolate cake."

"Triple-Chocolate Black Forest Volcano Cake" is hardly a hidden persuader: It's full-throttle hard sell. But what continually surprises Wansink is how often we're influenced by both the hidden and the obvious triggers to eat, and how little we are inclined to admit the role they play in our choices. "Regardless of how much we are influenced by what the person next to us is doing, or the menu description of a restaurant entrée, we vehemently deny being influenced," he says.

At Cornell, Wansink has shown a knack for the theatrical, perhaps dipping into his early experience as a comedian and his first academic post as a professor of marketing. "My research doesn't involve randomized controlled trials," he acknowledges. "It's based on field experiments instead of epidemiological studies." Beyond that, he knows how to design simple, graphic experiments that end up getting lots of press, even in magazines like Cooking Light.

In one, he gave students at a health and fitness camp the option of pouring any beverage of their choice into short, wide glasses or tall, thin ones. Here, he focused on the natural tendency to misjudge the effect of height proportionate to width: The campers who were given short glasses poured 74 percent more. Later he reproduced the study with bartenders, using booze -- a sexier-sounding study that was published in a peer-reviewed science journal and gained considerable media attention. The finding remained the same: Pour your beverage into a tall, thin glass, and you'll drink less.

In the world of the instinctive brain battling the conscious brain, of too much food everywhere, and too many hidden cues and hard-sell tactics, what's a person to do? Wansink advises a combination of tactics, a personal tool kit of strategies that keep hidden persuaders at bay.

First, think about where you put food in your home or office. "The easiest thing to do is to change your immediate environment so you can do the right thing without thinking about it," he says. This doesn't mean clearing your kitchen and home of all "temptations." Rather, Wansink's data suggests that the amount of certain foods you eat will vary if you vary their location. When you bake a pan of brownies, even a Cooking Light recipe, cut them into small pieces, and store out of view, on a higher shelf (don't worry, you'll remember they're there). Put fresh fruit in view instead. "You're much more likely to take and eat something off a fridge or cupboard shelf at eye level. Arrange storage at home so you see healthy stuff first," Wansink says.

Another dead-simple idea: Buy and use smaller plates and bowls. "I'm amazed by how powerful this is," he says. Other similar strategies are listed on the previous pages. Wansink, meanwhile, has bigger fish to fry. His Food and Brand Lab launched SmallPlateMovement.org to proselytize the argument that when it comes to plates, at least, size matters; and this year it convinced all 53 restaurants in Albert Lea, Minnesota, a town of about 20,000, to use 10-inch plates instead of the standard 12- to 14-inch plates.

"If it's a buffet, people will take less and waste less," he says. "If it's a fixed-plate restaurant, it makes portions look more appealing. On a 10-inch plate, 6 ounces of salmon looks like the best deal in the world!"

Results of the Albert Lea experiment will be released in January 2010. Even if positive, it may be hard to take the argument to the national level in a country in which big portions are constantly equated with good value -- consider the Thickburger. Still, this isn't Wansink's first time overcoming skepticism from the business community: He cooked up the now-ubiquitous 100-calorie pack.

Even plate-size preaching seems like small potatoes compared to Wansink's other major ambition: making the next version of Dietary Guidelines for Americans more useful. As executive director of the USDA's Center for Nutrition Policy and Promotion from 2007 to 2009, Wansink played a key role in selecting the committee currently developing the 2010 Guidelines, which form the basis of all government nutrition policy and are revised every five years. Wansink stacked the committee with members who share his wish to inform public policy with learnings from the kitchen-counter decisions of everyday eaters. He hopes this approach will give the 2010 Guidelines broader impact. (One can only hope, considering the head-scratching that greeted the design of the 2005 Food Guide Pyramid.)

"I pushed to include people with one foot in behavior and one in science," he says. "Everybody knows you're supposed to eat an apple instead of a candy bar, but it's not going to happen without help."