Why do we give to disaster relief? 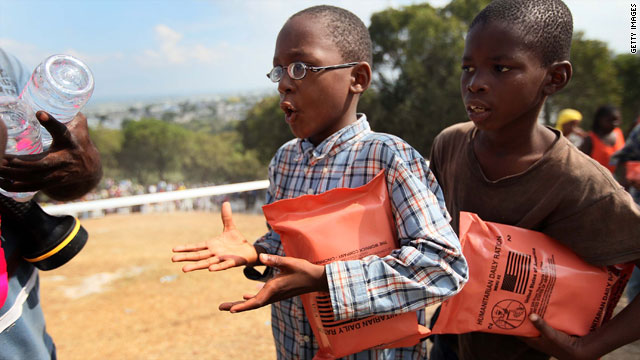 (CNN) -- Children are selling pink lemonade in Austin, Texas. A Minnesota couple is giving away money that they saved for their wedding. Chelsea Clinton hosted a spinning class in New York on Thursday with front-row "seats" going for $1,000.

These are just some of the ways that people across the United States are raising money for earthquake relief efforts in Haiti. Hundreds of millions of dollars have already been contributed to help after the 7.0-magnitude earthquake that hit January 12.

So, why do we open our wallets for strangers, like Haitian earthquake survivors? Is it out of empathy? Guilt? Compassion? Or something else?

Experts say these kinds of acts, which make people feel like they're part of something larger, are energizing and emotionally rewarding.

Studies have shown that when people get together and cooperate to do good deeds, it leads to positive feelings, said Liz Dunn, assistant professor of social psychology at the University of British Columbia in Vancouver, Canada.

Dunn's research shows that people get the most emotional benefit from giving money to recipients they know personally, or when they know someone who has a direct connection to a cause or charity. For instance, someone might feel better after giving money to an individual volunteering in Haiti than after donating to a large organization to which they have no personal ties.

"When we do the kind of giving that's more social, more personal, more meaningful, I think that's when we see the emotional benefits arising," she said.

Working with other people who care about a cause also creates personal ties and motivates donors. A fundraiser such as Team in Training, a charity sports training program that supports blood cancer research, is an example of a philanthropic organization that raises money by getting people to work together, she said. The group trains people for challenging sporting events such as marathons that they will participate in to raise money for leukemia and lymphoma.

The Chelsea Clinton spin class is another example of how people cooperating in a face-to-face context for a common cause gives people a better feeling than just entering a credit card number on an organization's Web site, she said.

"It's almost like a way of re-creating this feeling of doing good together in this small group setting," she said. "That is what we kind of evolved for."

Dunn and colleagues have a paper that will be published in the Journal of Health Psychology about the "dark side" of the giving issue: stinginess.

They found that when people are stingy, they experience a sense of shame, and that shame in turn leads to elevated levels of cortisol, a hormone associated with stress. "It may be bad for our bodies to behave in a stingy fashion," she said.

When we do the kind of giving that's more social, more personal ... that's when we see the emotional benefits arising.
--Liz Dunn, assistant professor of social psychology at the University of British Columbia

Even spending a little bit of money in a positive way can make a difference for someone's well-being, Dunn said, noting that a single dollar has a different relative value for different people.

But research is not clear on what exactly makes a person more likely to give, say, $5 rather than $5,000 to a cause. The Center on Philanthropy at Indiana University has found that race is not a factor, but that greater educational attainment, income and wealth are associated with higher dollar amounts, said Patrick Rooney, executive director of the center.

People tend to react to disasters with small gifts, and don't dramatically change their budgets, he said. In studies on giving in response to the September 11, 2001, attacks, to the tsunami in Southeast Asia and to Hurricane Katrina, the average gift was between $125 and $135. The median gift -- perhaps a better measure of what is typical -- was $50.

With the Haiti situation, empathy levels are high as outsiders realize how lucky they are to not have been in Haiti at the time of the quake, and that the people who are there have immediate needs such as food and water, Rooney said.

The community aspect of giving can also lead people to give money beyond just one-time relief donations, says Christopher Ellinger. He and his wife, Anne, started Bolder Giving, an Arlington, Massachusetts-based organization that cultivates a community of people who give away a large chunk of their money to philanthropy. Bolder Giving encourages people to look at their financial status and consider how much more they could give to good causes.

The group highlights a "50 percent league" -- those who give away at least 50 percent of their income for at least three years or at least half of their net worth at some point -- but that's not necessarily what the organization advocates, Ellinger said. "We're just looking to put out a challenge," he said.

But some people dedicate their careers to giving. Karen Ansara of Boston, Massachusetts, is affiliated with Bolder Giving and runs the Ansara Family Fund at the Boston Foundation, which partners with organizations internationally with the goal of eradicating poverty. She runs the fund with her husband, Jim, who is currently on the ground in Haiti.

Although the Ansaras are normally focused on giving to long-term projects rather than on disaster relief, the Haiti earthquake inspired them to break their rule and contribute to that cause in a big way. The Ansara Family Fund has pledged to match every dollar, up to $1 million, that is given to the Haiti Fund at the Boston Foundation. A committee will decide which organizations will receive the money. As of Thursday, the Haiti fund had received more than $200,000 in outside donations.

"I'm getting just flooded with e-mails from people who care so much about what's going on in Haiti, and want to help, and are happy to know somebody who can help," Karen Ansara said.

Part of the reason for her commitment to funding anti-poverty efforts is that she adopted three daughters from Ecuador, and she saw the poor conditions in which children there have to grow up.