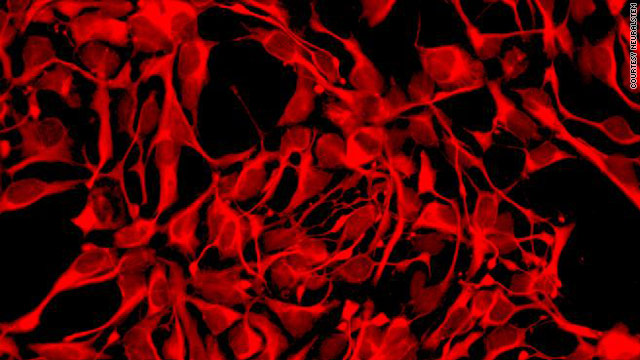 Stem cells like these were injected into the spine of an ALS patient.
STORY HIGHLIGHTS
RELATED TOPICS

ATLANTA, Georgia (CNN) -- For the first time in the United States, stem cells have been directly injected into the spinal cord of a patient, researchers announced Thursday.

Doctors injected stem cells from 8-week-old fetal tissue into the spine of a man in his early 60s who has advanced ALS, or amyotrophic lateral sclerosis. It was part of a clinical trial designed to determine whether it is safe to inject stem cells into the spinal cord and whether the cells themselves are safe.

ALS is a fatal neurodegenerative disease that causes the deterioration of specific nerve cells in the brain and spinal cord called motor neurons, which control muscle movement. About 30,000 Americans have ALS at any given time, according to the ALS Association.

There is no cure for ALS, which is better known as Lou Gehrig's disease, named after the New York Yankees' first baseman and Hall of Famer who retired from baseball in the 1930s after being diagnosed with the disease.

As the illness progresses, patients lose their ability to walk, talk and breathe. Patients usually die within two to five years of diagnosis, according the ALS Association.

Neuralstem Inc., a Rockville, Maryland-based biotech company, received approval from the U.S. Food and Drug Administration to conduct the clinical trial in September. The company is fully funding the research and provides the stem cells that are being injected into the patients.

Neuralstem announced the start of the clinical trial in a news release Thursday.

"We are entering a new era of cell therapeutics for ALS, and in my opinion, it is an new era of hope for patients with ALS," Feldman said.

At least 12 patients are expected to participate in this early research. They are to receive the stem cell transplants at Emory University in Atlanta, Georgia.

"This is the first study to see if the invasive injection into the spinal cord is safe for the patient," said Lucie Bruijn, science director of the ALS Association.

This first patient in the clinical trial received several injections of stem cells into the lumbar region of the spinal cord, the area that controls leg function, because most ALS patients first lose muscle function in their legs, according to Karl Johe, Neuralstem's chairman and chief scientific officer.

Bruijn says there have been a few other occasions outside the United States in which fetal stem cells have been injected into a patient, "but not necessarily using a very [rigorous] trial design." She adds that there were also a couple of small studies in Italy that injected other types of stem cells into a few patients but that this is the first FDA-approved trial in the United States.

"Our biggest hope for stem cells is to significantly slow the progression the disease," Bruijn said.

The ALS Association is not providing funding for this clinical trial, but it has supported the work of Dr. Nick Boulis, the Emory neurosurgeon who developed the surgical technique used to inject the stem cells.

Johe invented the technology that allows the company to manufacture billions of copies of stem cells that are taken from a single source of spinal cord cells: cells that were extracted from fetal tissue, which was donated to the company.

"The cells are human neural stem cells," Johe said, acknowledging that the introduction of stem cells is a very invasive procedure.

"What we are attempting is a novel approach by directly injecting them into the middle of the spinal cord, which to our knowledge has never been done before," Johe said.

Researchers plan to follow this and future patients participating in this trial for a long time to determine the safety of the procedure.

Johe says that once the safety of this type of transplant is determined, he and his colleagues hope to see whether this is a possible treatment for ALS.

"This is not a cure. We are not replacing those motor neurons [nerve cells which tell muscles to contract]. These stem cells don't generate motor neurons. Instead they protect the still-functioning motor neurons," Johe explained.

Bruijn says that injecting stem cells into the spinal cord -- in the region where the motor neurons are located that affect ALS -- is a breakthrough. But she cautions that this is only the first step in the first part of this clinical trial. It's too early to draw any conclusions about the effectiveness of this treatment, especially since the trial has only just begun.

She notes that everyone involved with the study and other ALS patients have to wait and see what the results of the clinical trial will be.

The FDA granted the first approval for injecting human embryonic stem cells into humans to Menlo Park, California-based Geron Corporation in January 2009. Their trials were expected to start last summer but have yet to begin.