Patients demand: 'Give us our damned data' 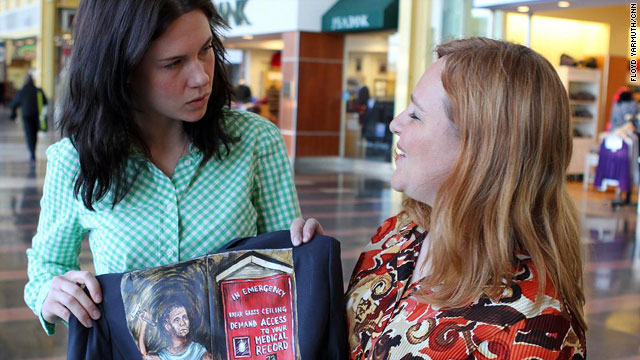 (CNN) -- For five days as her husband lay in his hospital bed suffering from kidney cancer, Regina Holliday begged doctors and nurses for his medical records, and for five days she never received them.

On the sixth day, her husband needed to be transferred to another hospital -- without his complete medical records.

"When Fred arrived at the second hospital, they couldn't give him any pain medication because they didn't know what drugs he already had in his system, and they didn't want to overdose him," says Holliday, who lives in Washington. "For six hours he was in pain, panicking, while I ran back to the first hospital and got the rest of the records."

Despite a federal law requiring hospitals and doctors to release medical records to patients who ask for them, patients are reporting they have a hard time accessing them leading to complications like the ones the Holliday family experienced.

'What part of "Give us our damn data" do you not understand?'

Dave deBronkart, co-chairman of the Society for Participatory Medicine, put it this way in a recent blog post: "What part of 'Give us our damn data' do you not understand?"

While there are no statistics on how many patients have trouble accessing their own records, there have been "repeated" complaints to the Department of Health and Human Services, according to a senior health information privacy specialist at the department's Office for Civil Rights, which enforces the federal law that gives patients access to their records.

"It's crazy ridiculous when you can't walk out of a doctor's office or hospital with a copy of your medical records if you ask for them," says Deven McGraw, director of the health privacy project at the Center for Democracy and Technology.

"Lack of information kills people," she says. "Having your medical records can save your life."

Elizabeth Lietz, a spokeswoman for the American Hospital Association, says she can't speak to any specific case where a patient had trouble getting records from a hospital.

"Every patient has a right to get their medical records," Lietz says. "Our goal is to work with patients to get their records while at the same time protecting their privacy rights."

DeBronkart encourages patients to get their records before they're admitted to the hospital.

He points to an incident in 2008 when a Minnesota hospital was supposed to remove a patient's cancerous kidney -- but instead removed the healthy kidney, leaving the diseased one in the patient's body.

The hospital, Park Nicollet Health Services said the "tragic error" occurred because "the side of the effected kidney was incorrectly identified in the medical chart several weeks before the surgery took place."

"If that patient had had their medical records before the surgery, they could have caught this error and corrected it," deBronkart says.

As her husband writhed in pain, Regina Holliday drove to the first hospital with her husband's power of attorney in hand.

"I had to get nasty. I had to say, 'You did a bad job, and I'm angry, and the second hospital is angry,' " she says. An hour-and-a-half later, she had the records in hand and took them to the second hospital, where after looking at the chart, they gave her husband more pain medication.

CNN contacted the first hospital for comment and received this reply: "HIPAA rules don't allow us to talk about a patient."

Fred Holliday died two months later from his kidney cancer at the age of 39. He was the father of two children and an assistant professor of film studies at American University in Washington.

After he died, Holliday, an artist, painted a scene on the back of a jacket depicting her husband in a hospital robe and handcuffs with the words "Data Prison" above him.

She sold the jacket to Jen McCabe, CEO of Contagion Health, who wears it to medical conferences, where she says it's attracted many comments.

"Almost everyone I talked to had a horror story about a medical error or difficulty getting access to medical records to take to a new doctor or hospital," she says.

One of those people was Alan Viars, a CEO of a high-tech company in Baltimore, Maryland. Viars says he learned of the importance of looking at your own medical records when his father went for an annual physical last summer and his doctor told him an EKG test the year before indicated he'd had a heart attack.

He says no one had ever told his father he'd had an abnormal EKG. "His physician didn't bother to look at the result of his EKG or failed to inform my father of his condition," Viars wrote in a blog. "Unbelievable, I know, but true."

Viars' father went to a hospital near his home in West Virginia, where a cardiac catheterization showed two arteries were so severely blocked he needed open heart surgery. Online, Viars found another hospital with better success rates for bypass surgery, and arranged to have his father transferred there.

His sister, Leslie Cryster, tried to get their father's medical records. In particular, she wanted a copy of a CD showing the results of his cardiac catheterization, an invasive procedure where a tube is inserted through an artery to the heart. Cryster, a nurse anesthetist, knew that if the CD didn't get to the next hospital, they'd have to do procedure, which has risks, all over again.

Finally, Cryster talked to someone else at the hospital and threatened to call her sister-in-law, who's an attorney. After talking it over with a cardiologist, she received her father's records, and he had his bypass surgery a few days later at the second hospital.

To make sure you get your medical records, follow these tips.

The federal Health Insurance Portability and Accountability Act, which governs access to medical records, gives hospitals and doctors 30 days to respond to a request for medical records, although some state laws provide for a shorter time frame, and in urgent situations, such as a transfer to another hospital, it's customary for hospitals to move more quickly.

Be prepared to make your request in writing, McCabe says. You can bring it in person, or fax the request in, but make sure you confirm that the hospital's received it.

One way to get your medical records more quickly is to seek out providers who use electronic medical records so the records can be e-mailed to you, she says. Some providers have an electronic portal so you can read your records anytime you want on a secure site on the Internet.

2. Get the new hospital or doctor to help you

Lietz says if you need your records because you're switching hospitals or doctors, ask the new office to make the records request.

"Have the provider make the request," she says. "To be honest, it's going to be faster."

3. Remember the limits of the law

Some states allow even more information to be kept from a patient. For example, the New York Department of Health Web site says doctors may deny you access to "personal notes and observations" they've made in your record.

"Sadly, you might have to get angry in order to gain access to your medical records," Viars wrote in his blog. "Don't let them tell you no. It's your data."

If you have trouble getting access, you can file a complaint with the Office of Civil Rights at the U.S. Department of Health and Human Services.