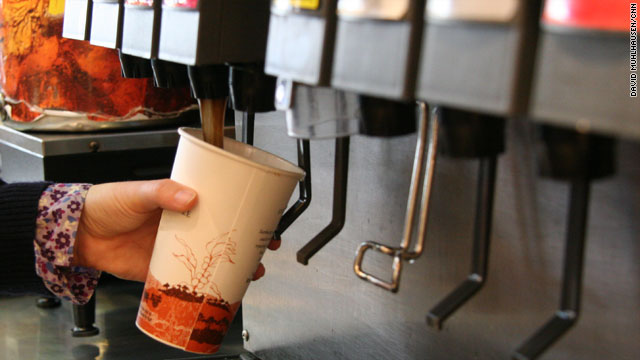 A study found that soda dispensed in the morning was more likely to have bacteria than when it is poured in the afternoon.
STORY HIGHLIGHTS
RELATED TOPICS

(CNN) -- It fizzes. It quenches. And it could also contain fecal bacteria.

Nearly half of the 90 beverages from soda fountain machines in one area in Virginia tested positive for coliform bacteria -- which could indicate possible fecal contamination, according to a study published in the January issue of International Journal of Food Microbiology.

"Certainly we come in contact with bacteria all the time," Renee Godard, lead author of the study and professor of biology and environmental studies at Hollins University, a private liberal arts college in Roanoke, Virginia. "It's simply that some bacteria may potentially cause some disease or gastrointestinal distress. One thing we hesitate with is that people get afraid of bacteria. Many of them are benign or helpful, but certainly, I don't want E.coli in my beverage."

Many of the soda beverages from the dispensers fell below U.S. drinking-water standards, according to the findings.

Godard and her colleagues acquired 90 beverages of three types, (sugar soda, diet soda, water) from 30 fast food restaurants in a 22-mile area near Roanoke, in southern Virginia. They surveyed beverages from both self-service and employee-dispensed machines and the samples were tested.

There were no reported outbreaks of food-borne illness related in the Roanoke area at the time of the study.

They found that 48 percent of beverages obtained from soda fountains contained coliform bacteria, 11 percent contained E. coli (which are mostly harmless, but some can cause diarrhea, urinary tract infections, respiratory illness and pneumonia), and 17 percent had Chryseobacterium meningosepticum (which could sicken newborns or adults with weakened immune systems).

Dean Cliver, professor of food safety emeritus at University of California Davis, said it would be premature to draw broad conclusions about all soda fountains from a localized study.

"How sanitation regulations are promulgated and enforced in a community are different," Cliver said. "Some communities are more on to it than others. How much of a threat it represents? It's probably limited. Once again, it's a matter of what regulations are in place, who pays attention and whether it's being followed."

The samples were contained in petri dishes and the bacteria multiplied within 48 hours, so much so that they became visible to the naked eye as 300 to 400 tiny dots, Godard said.

A Hollins undergraduate microbiology student accidentally discovered that water from a restaurant beverage dispenser contained bacteria while completing a homework assignment. When the results came back, this piqued the interest of faculty and students.

The researchers are uncertain how the bacteria got inside the beverage machines.

"It could be from dispensing with a hand that wasn't clean or using wet rags to wipe down the machine," Godard said. "We haven't done the work to really identify those potential sources and how these bacteria get established."

Manitowoc Foodservice, one of the leading manufacturers of ice and beverage equipment, did not have the opportunity to review the study, but released this statement in response to CNN.com's questions: "We emphasize in our product support material proper methods for and the importance of frequent, thorough cleaning and sanitizing of foodservice equipment. In food equipment as in any environment where microorganisms can occur naturally or be spread by contact, it is essential to follow proven steps for cleaning and sanitizing."

The National Restaurant Association, a business association for the restaurant industry, e-mailed this statement in response to the findings: "While the results of this study are disconcerting, we feel that it isn't representative of our industry and that our guests can safely enjoy beverages from dispensers and single-serve containers alike."

The American Beverage Association made this statement: "Fountain beverages are safe. Consumers can rest assured that our industry's fountain beverages pose no public health risk." The organization, which represents hundreds of beverage producers, distributors, and franchise companies stated that "Importantly, our industry meets, and often exceeds, all government health standards in bringing its products to market."

Whether other outbreaks have occurred because of contaminated soda machines is difficult to determine, because food-related illnesses are notoriously challenging to pinpoint, Godard said.

According to the research literature, one study has linked a 1998 outbreak to soda fountains after 99 soldiers in a U.S. Army base were hospitalized with gastroenteritis.

Although ice can become contaminated, researchers ruled it out as the source of contamination after testing revealed that it did not contain coliform bacteria.