Five 'eating better' foods to slip into your diet in '10 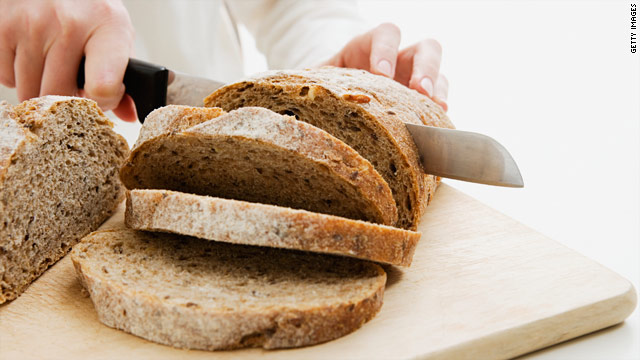 Will rye be the new "in" grain in 2010? Research shows it can help lower cholesterol as well as prevent type 2 diabetes.
STORY HIGHLIGHTS

(CNN) -- A new year has arrived, and with it, a new list of resolutions. If "eating better" is on your list, experts say, there are a few items you can slip into to your diet that can improve your health and help you ward off certain diseases in 2010.

Katherine Tallmadge, national spokeswoman for the American Dietetic Association and a registered dietitian in Washington, D.C., says you can find these foods in most stores. Best of all, they're high in benefits but low in calories.

Add oat, barley and rye to your daily diet. Doctors have known that oat can bring down cholesterol levels -- but so can rye, which may become the new "in" grain for 2010. In a study in the current issue of the journal Nutrition, Finnish doctors found that men who had borderline high cholesterol could lower their numbers by eating dense rye bread.

Video: Foods that are good for you
Putting these foods into your diet are excellent substitutes for other foods that may not be healthy.
--Katherine Tallmadge
RELATED TOPICS

The American Diabetes Association also recommends increasing your intake of dietary fiber and whole grain products, such as rye, to prevent the development of type 2 diabetes. "Rye lowers cholesterol like oats do, and it evens out blood glucose for diabetics," Tallmadge says.

But don't run out and buy regular rye bread at the store. Instead, purchase rye mixed with whole wheat -- it's found in dense, whole-grain breads and in specially made crackers. "I buy the rye crackers," Tallmadge says. "They're low in fat, high in rye and are a perfect snack with low-fat cheese."

As for barley, the U.S. Department of Agriculture found that diets high in barley lowered total cholesterol levels and reduced the risk factors associated with excess weight, type 2 diabetes and cardiovascular disease.

Barley can be cooked and served as a side dish similar to rice or couscous. It can also be used as an ingredient in soups, stews, casseroles and salads.

Dr. Peter Shields, professor of medicine and oncology and deputy director of the Lombardi Comprehensive Cancer Center at Georgetown University Medical Center, has done extensive studies on diet and cancer. He says any diet filled with fiber, either from fruits and vegetables or grains, is good for you.

Researchers have found that soy can ward off certain cancers as well as help your heart. The Food and Drug Administration says foods high in soy protein may reduce the risk of coronary heart disease. According to the FDA, 25 grams of soy protein a day can cut heart problems by reducing cholesterol levels.

Soy can be found in numerous products, such as tofu burgers, soy meats and soy milk. In order to get the full benefit of soy, the FDA suggests looking for products that have 6.25 grams or more of soy protein per serving and that are low in fat (less than 3 grams), saturated fat (less than 1 gram) and cholesterol (less than 20 mg).

Tallmadge urges parents to introduce soy into their children's diets as well. "We know that when introduced earlier in life, it can have a very strong protective effect against breast cancer and prostate cancer," she says. Soy can also help fight childhood obesity because it's low in fat and calories. Soy also contains vitamins, minerals, fiber and protein for growing little ones, and it comes in a variety of foods that kids like, such as chocolate soy milk, frozen pizza, taco "meat" and "chicken" nuggets.

Salmon and other oily fish

"Wild salmon is a wonderful dish that's not only tasty but is great for you," Tallmadge says. "It cuts inflammation in the body that can lead to heart problems. It's a good source of vitamin D and also contains omega-3 fatty acids that keep the brain and heart healthy."

Salmon and other oily fish -- such as mackerel, sardines, herring, fresh tuna, trout and anchovies -- are among the few food sources of vitamin D. A 3.5-ounce fillet of cooked salmon contains 360 international units of vitamin D -- almost a full day's recommended dietary allowance for anyone under the age of 70. Oily fish are also chock-full of omega-3 fatty acids, which curb cardiovascular disease by decreasing the risk of arrhythmia (which can lead to sudden cardiac death), triglyceride levels and the growth rate of atherosclerotic plaque.

The American Heart Association recommends eating fish, particularly oily fish, twice a week. Although almost all types of fish are good sources of protein, it's the oily fish that have omega-3 fatty acids. But the AHA also calls for consuming fish in moderation. That's because some oily fish -- such as swordfish and fresh cuts of tuna -- contain mercury, a heavy metal that interferes with the brain and nervous system. High mercury levels can cause serious health problems, especially for children and pregnant women.

Tallmadge calls red wine the "almost the perfect drink." "But because it contains alcohol, you need to drink it in moderation -- about five ounces a day for women, 10 ounces a day for men," she says.

Nutritionists and physicians are careful about recommending alcoholic beverages, but agree red wine is good for you in small doses. Research suggests antioxidants in red wine, called polyphenols, help protect the lining of blood vessels in your heart. These antioxidants come in two main forms: flavonoids and nonflavonoids. Flavonoids are found in foods such as oranges, apples, onions, tea, cocoa and grape juice, as well as other alcoholic drinks like beer and white wine, but red wine contains the highest levels.

Some research shows that resveratrol may reduce inflammation and blood clotting, both of which can lead to heart disease. More research is needed before it's known whether resveratrol causes these effects. If you choose to drink wine for your health, Tallmadge says stick to red, because research has shown red grapes have 10 times more health benefit than white grapes.

"It seems all the benefits, like resveratrol, are in the seeds and the skin," Tallmadge says, "So when they crush the red grapes, the benefits stay in the wine."

But Georgetown's Shields says that any alcohol, including wine, has also been found to increase the risk of breast cancer. "Some studies have shown an increase risk of 14 percent with each gram of wine you drink on a daily basis," he says.

And a recently published study found that drinking even moderate amounts of alcohol raises the risk of a breast cancer recurrence.

"It's really important that you moderate how much you drink, because the risk might outweigh the benefit," Shields says.

"Think green," Tallmadge says. Green tea is also full of antioxidants that scientists say can ward off some cancers. In a recent Japanese study that looked at nearly 500 Japanese women with stage I and II breast cancer, researchers found the women who drank more green tea before and after surgery had a lower chance of the cancer recurring. Other studies from China showed that the more green tea patients drank, the lower their risk of developing stomach, esophageal, prostate, pancreatic and colorectal cancer, compared with those who did not drink green tea.

Scientists say that's because it revs up your metabolism. In a study published in the American Journal of Clinical Nutrition, green tea extract increased energy expenditure, which is a measure of metabolism, plus it had a significant effect on fat oxidation, or how much fat your body burns.

But here's the catch: One cup won't do the trick. "You have to drink a lot of it ... at least three, up to six cups a day, to get the effect," Tallmadge says. "And that means you use bags or loose tea every time you make a cup." In other words, to get the full benefit, you have to brew it, not buy it in a bottle.

Another catch? Most of the green tea research has been done on animals. "Although laboratory data has shown great benefits in green tea, a lot of statistics on humans still aren't there yet," Shields says. "The green tea industry has asked the FDA for permission to let them put these claims on their boxes; as of now, the FDA says there's not enough human data to justify the labeling."

Back to that list of resolutions. When it comes to eating better, Tallmadge and Shields say moderation and balance are important. No one food is going to keep you cancer-free or make your heart healthy. "It's unrealistic to think that eating only soy or grains all the time is going to make you a healthier person," Shields says. "You need to look at the whole picture, and have good, healthy behaviors: Eat well, drink in moderation and stay active. All of these lead to a healthier life."

Tallmadge agrees. "Putting these foods into your diet are excellent substitutes for other foods that may not be healthy," she says. "If you are trying to cut down on sugar, and are looking for a drink alternative, why not green tea? Or a better snack at night can be rye crackers instead of chips. It's all a matter of balance and good nutrition."