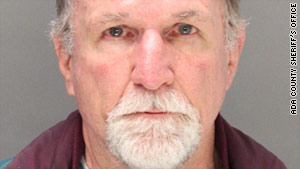 Russell Miller, 68, was arrested after the plane landed in Boise, Idaho.
STORY HIGHLIGHTS

(CNN) -- A 68-year-old Idaho man has been charged with misdemeanor battery after police say he struck a teen who would not turn off his iPhone while the plane they were in was taxiing for takeoff.

The man, Russell Miller, was arrested after the plane landed, Lipple said.

Miller told police that the 15-year-old boy refused to turn off his phone after directions from the flight crew. The suspect "felt he was protecting the entire plane and its occupants," Lipple said.

According to the police report, Miller said he smacked the boy with the back of his hand to get his attention. Officer, however, said the incident left a mark on the boy's shoulder.