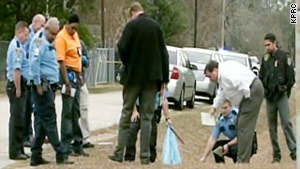 Law enforcement is on the scene in Houston, Texas, where a burned body of a child was found Tuesday morning.
STORY HIGHLIGHTS

(CNN) -- Houston, Texas, police were investigating the death of a child whose burned body was found Tuesday morning in a drainage ditch.

Police got a call from someone who initially believed the remains to be burned debris, said homicide Lt. Leslie Martinez. The body is about 3 feet tall, she said.

The body apparently had been burned elsewhere and authorities were uncertain of the child's sex.

Houston police also are searching for a missing 12-year-old boy. The Amber Alert lists him as being between 4 feet, 8 inches tall and 5 feet tall.

Police said they could not say whether the cases were connected until the body has been identified. CNN affiliate KPRC reported tests will be expedited, but results and a cause of death could take a few weeks.

Jonathan has short red hair above his ears and an overbite. He was last seen wearing blue jeans, a tan shirt with a picture of a guitar, white sneakers with red stripe and a gray zipped jacket with a hood. The alert said he may be in the company of an adult female with a raspy voice.

The boy's mother reported him missing about seven hours after he was last seen, police spokesman Kese Smith said.