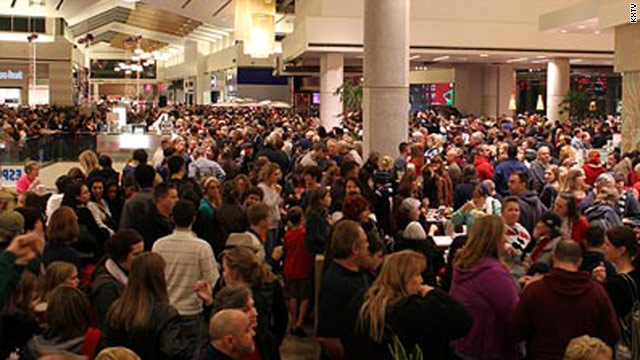 Read more about the mall evacuation from CNN affiliate KXTV.

(CNN) -- Two months after a California mall was closed following a devastating fire, authorities had to close it again Monday night after Christmas singers clogged the shopping center.

"The enthusiasm for the Halleluiah event tonight was far greater than anticipated by organizers," said a statement from the Westfield Galleria at Roseville. "Out of an abundance of caution, the center was evacuated. We apologize for this inconvenience."

The Sacramento Choral Society was holding what police called a "well-publicized" event to sing the "Hallelujah Chorus" in the mall's food court, scheduled for 7:30 p.m.

"Come join our large Chorus of area Singers as they burst into Handel's Hallelujah Chorus much to the surprise and delight of Shoppers in the Food Court of the recently reopened Westfield Galleria at Roseville," the society's website trumpeted ahead of the event.

But less than an hour beforehand, too many people had crowded into the mall.

Engineers later checked the structural integrity of the mall and found it to be safe.

The holiday crowd and choral singers eventually got to raise their voices in song, but in the parking lot.

Police said the mall, located about 18 miles northwest of Sacramento, will reopen Tuesday at 8 a.m.

A large section of the mall burned on October 21, after a man set it on fire while barricaded inside a video game store, during a standoff with police.

An investigation later showed that the sprinker system was shut off for more than an hour during the blaze.

The damage was so severe that California Gov. Arnold Schwarzenegger declared a state of emergency at the time. The governor's order suspended the normal one-week waiting period for mall employees to seek unemployment benefits.