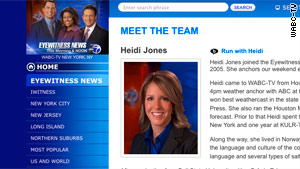 New York (CNN) -- An on-air meteorologist for New York's WABC-TV has been arrested, accused of falsely reporting an attempted sexual assault to police, a story she later recanted, according to the New York Police Department.

Heidi Jones, who does weather reports on the station's weekend newscasts, called police November 24 saying she had been attacked while jogging in Central Park on September 24, according to a police spokesman who would not provide a name, citing police policy.

Jones said she had crossed paths with the attacker, whom she described as a Hispanic male in his 30s, on November 21 when she said he taunted and harassed her.

Police said Jones recanted the story as she was being questioned after filing the initial report. Her motivation for giving the story is unclear.

Jones was arrested Monday and has been charged with a misdemeanor count of making a false report.

According to a statement read on WABC on Wednesday, Jones has been suspended from the station pending an internal investigation.