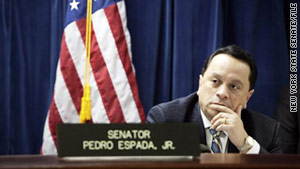 New York (CNN) -- Outgoing New York state Sen. Pedro Espada Jr. and his son, Pedro, were charged Tuesday with embezzling $500,000 from a federally funded health care nonprofit, according to a statement from the U.S. attorney for the Eastern District of New York.

Federal prosecutors slapped both men with five counts of embezzlement and one count of conspiracy, the statement said.

Espada served as president and CEO of the Comprehensive Community Development Corp. -- referred to locally as the Soundview Health Care Network -- which receives more than $1 million in federal funding from the U.S. Department of Health and Human Services, it said.

The network receives millions of dollars more in Medicare and Medicaid reimbursements each year, the statement said.

The pair are accused of abusing their senior positions to divert Soundview funds for personal use and for the benefit of family members and friends, the statement said.

"The indictment alleges that funds that could and should have been applied to purchase medical equipment and enhance health care services for an historically under-served population were diverted by the defendants for their personal use and to benefit friends and family members," U.S. Attorney Loretta Lynch said. "In these difficult economic times, the charged crimes are all the more reprehensible."

Defense attorney Susan R. Necheles said the Espadas "deny any wrongdoing, and we intend to fight the charges in court."

Soundview Health Care Network includes five health centers that cover the southeast, central and northeast sections of the Bronx, according to its website.

The group's mission "emphasizes the provision of quality health and social services to individuals regardless of their ability to pay."

"I have not seen anything on this scale," Cuomo said after originally charging him, along with 19 associates, with "looting" the nonprofit of more than $14 million.

"Thirty years ago, Sen. Espada founded the Soundview Health Care Center," Necheles said in a written statement. "Soundview has provided high quality health care to thousands of families, children and senior citizens in the Bronx. Today is a sad day for Soundview and a sad day for the Espada family."

If convicted, the men face a maximum sentence of 55 years in prison, as well as a fine of $250,000 on each count, according to the U.S. attorney's office.