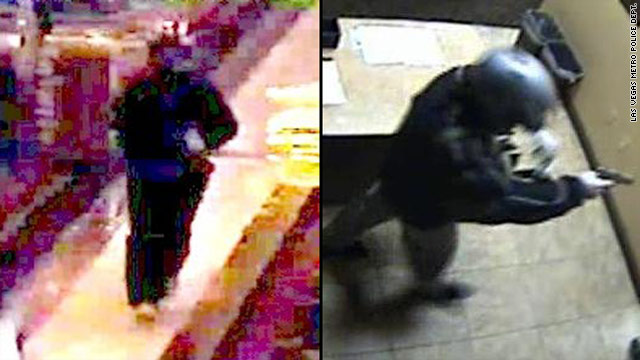 (CNN) -- Police say they're trying to find a helmet-wearing gunman who robbed one of Las Vegas' most recognizable casinos of $1.5 million in casino chips Tuesday morning -- and may also have robbed a different casino last week.

With a helmet and visor hiding his face, the man rode to Bellagio casino on a motorcycle, walked inside and pulled a gun at a craps table where several people were gambling at about 3:50 a.m., said Lt. Clint Nichols of the Las Vegas Metropolitan Police Department.

The gunman told everyone not to move, and then took the casino's supply of chips "that were ... [in] the box they keep on the craps table," Nichols said.

The man then ran back outside to the motorcycle, which he rode away, Nichols said. No injuries were reported.

The man might be the same person who robbed the Suncoast Hotel & Casino on Thursday morning, police said. In that robbery, a man wearing a motorcycle helmet robbed the cage area of a poker tournament room of less than $20,000 in cash at about 12:30 a.m., Nichols said.

The Suncoast casino is about a 20-minute drive northwest of the Bellagio, the Las Vegas Strip facility that is renowned in part for a huge fountain that shoots water 240 feet into the air, choreographed to music.

Police released surveillance images of both robberies, as well as surveillance video of the suspect running through the Bellagio. The Bellagio images show a man wearing a black helmet with white stripes, a black down jacket, black pants and gloves, police said. The man is white, about 5 feet 10 inches to 6 feet tall and weighs about 220 pounds, according to police.

The Suncoast images show the robber wearing a silver helmet and dark clothes.

Nichols said he believes the chips taken in the Bellagio robbery range in value from $100 to $25,000. The higher-value chips should be hard to convert, he said.

"The industry has some safeguards in place that make that ... extremely difficult," Nichols told reporters at a news conference Tuesday.