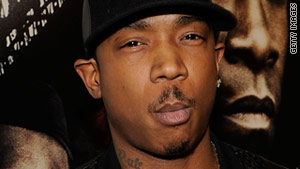 New York (CNN) -- Rapper Ja Rule will face two years in prison after pleading guilty to attempted criminal possession of a weapon on Monday, according to a Manhattan District Attorney statement.

The 34-year-old hip-hop star, whose real name is Jeff Atkins, faced a single second-degree weapons charge after police found a loaded semi-automatic firearm -- with the serial number scratched off -- hidden in the backseat of his luxury Maybach sedan, the statement said.

The incident occurred on New York's Upper West Side in July 2007, it said.

Atkins, who was nominated for a Grammy Award in 2001, will be registered as a gun offender, according to the statement.

"Despite having some of the strongest anti-gun laws in the nation, gun violence continues to plague this city," District Attorney Cyrus R. Vance Jr. said. "Gun crimes are serious offenses, and today's guilty plea should send a serious message to anyone thinking of illegally bringing a gun into New York City."

Atkins' attorney, Stacey Richman, called the deliberations "unreasonable" after the rapper "stepped up and took responsibility" for the violation.

Monday's ruling comes less than a week after a months-long police sting led to the arrest of a 20-year-old accused of dealing cocaine and guns; he was charged with selling 25 illegal firearms to an undercover detective, prosecutors said.

Shootings, and homicides by way of shootings, increased slightly in Manhattan this year, while nearly a quarter of the 240 defendants indicted on gun possession charges in 2010 were identified as 18 years old or younger, according to the district attorney's office.

"These are kids that should be headed to school, not a prison cell or an early grave," Vance said. "So we have a full-court press on those who possess loaded firearms in Manhattan, or who those sell loaded firearms."