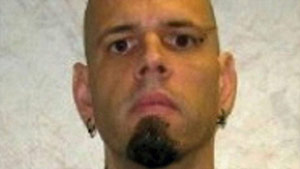 (CNN) -- A California man who spent a month on the run with his 15-year-old niece is now in a San Francisco jail, and the girl is back home with her parents, according to police and relatives.

Charles David Berlinghoff, 44, was caught this weekend, four weeks after the Shasta County Sheriff's office urged the public and law enforcement to be on the lookout for him. At that time, the police issued statements indicating his niece, Jean Marie Berlinghoff, was with him and "is believed to be endangered."

The girl, meanwhile, was reunited with her family at 8 a.m. Sunday, according to police. Her father called the meeting very emotional, full of hugs and tears.

"I was able to put my arms around her and hug her," Jake Berlinghoff told HLN's Jane Velez-Mitchell on Monday. "Amazing is an understatement. I can't put to words how happy I was to see her again, and how happy her mom was to see her."

That feeling was the opposite of the parents' feelings in previous weeks, while their daughter's whereabouts and condition were unknown.

Charles Berlinghoff had been in and out of his extended family's life, even losing regular contact for a full decade, his brother told HLN..

In 1998, Charles Berlinghoff pleaded no-contest to one count of child molestation -- part of a deal in which three other child molesting counts were dropped, according to California court documents. But his brother said that the extended family didn't know about that sex offense, a charge that the judge in 2002 expunged from his record.

On November 12, the Shasta County Sheriff's Office issued a statement saying that Jean Marie and her uncle were missing, having last been seen in North Redding, California, traveling together in a 1987 gray Oldsmobile.

A felony arrest warrant for child stealing -- when a person entices, takes or hides a child from his or her lawful guardian -- was put out soon thereafter for Charles Berlinghoff. Police said that an additional arrest warrant, details of which were not released, was obtained December 6 by Shasta County detectives.

The National Center for Missing and Exploited Children got involved, helping publicize information about the girl and her alleged abductor on transit and other signs in northern California. A $10,000 reward was offered for information leading to Jean Marie's recovery and her uncle's arrest, and authorities were on the look-out for the car.

While on the run, Charles and Jean Marie spent much of their time staying in homeless shelters and eating in soup kitchens, Jake Berlinghoff said.

Their run ended when one of Jean Marie's cousins, who lives in San Francisco, spotted the pair Saturday while shopping for a jacket, said Jake Berlinghoff. The cousin called 911 and trailed the pair from a distance before police arrived.

Jake Berlinghoff said that he was "ecstatic" when he got word that Charles was in custody and his teenage daughter was safe, adding that a tearful Jean Marie told him "she was happy to be home."