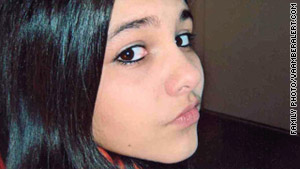 Police have been searching for Brittany Mae Smith, 12, since her mother's body was found Monday.

(CNN) -- Tearful relatives sent messages of love and concern Wednesday night to a 12-year-old girl who authorities believe was abducted by the boyfriend of her dead mother.

Virginia police said earlier that someone may be helping Jeffrey Scott Easley, 32, subject of a felony abduction warrant in the case of Brittany Mae Smith.

Police are "still actively searching" for Brittany, and believe she and the suspect may be camping in the region, Roanoke County Police Chief Ray Lavinder told reporters. More than 375 tips have come in.

"I prayed for you everyday since I found out you were gone and will continue to pray until you are found and returned to us," Brittany's cousin, Kim Stephenson, said at an evening press conference.

Brittany is believed to be with Easley, who met the girl's mother on the internet, authorities said. They do not know if Brittany went with Easley willingly. The pair may be seeking refuge in another state, the chief said.

"As to what relationship Jeff Easley and Brittany may have between them is irrelevant," Lavinder said. "With a child, consent is irrelevant in the eyes of the law. She is a victim."

Authorities provided images of two tattoos, including a red star, Easley is believed to have.

Authorities also showed an image of a blue dome tent they believe Easley purchased December 3 at a local Walmart.

Easley and Brittany are believed to have bought several other items at a Salem, Virginia, Walmart before they disappeared.

Lavinder said the key is finding a silver 2005 Dodge Neon four-door sedan with Virginia tag XKF-2365 that belonged to the girl's dead mother.

"For someone just to drop off the face of the earth -- I think that someone has to be providing them some money or some other support for them to remain unlocated," Lavinder said Wednesday.

Authorities launched a search for the seventh-grader Monday after officers found the body of Brittany's mother, Tina Smith, 41, inside the family's Salem home. Tina Smith's co-workers contacted police after the woman failed to show up for work Monday morning.

Smith's death is being investigated as a homicide, Roanoke County spokeswoman Teresa Hall told HLN Wednesday. She would not provide details of an autopsy.

Lavinder asked Easley to safely return Brittany so that she could attend Tina Smith's funeral.

"I thinks it's important that she be able to say goodbye to her mother," he said.

Police are examining social media sites that may have been used by Easley and Tina Smith.

A friend of Brittany Smith told the Roanoke Times that the missing girl called her several weeks ago.

Brittany was afraid her mother's live-in boyfriend "would come over and take her away and hurt her mom," Rebecca Kilian, 13, told the Times on Tuesday.

Kilian told the Times that Brittany asked her to stay on the phone until her mom got home.

Virginia State Police are working with North Carolina, Alabama, West Virginia, Kentucky, Ohio and Florida to issue alerts in their states for the missing vehicle and Easley and Brittany Smith, authorities said.

Police are "confident" that the girl is with Easley, Lavinder said. He described Easley as a "friend of the family" who "developed a relationship" with her. Easley moved in with Smith and her daughter in October, the chief said.

After finding Tina Smith's body, police soon got information that Brittany Smith's whereabouts were unknown, leading them to issue the statewide alert.

"We found out pretty quickly that (Brittany) had not shown up for school. Nobody seemed to know where she was," said Roanoke County Police Lt. Chuck Mason Monday, according to CNN affiliate WSET of Lynchburg, Virginia, adding that police were concerned her disappearance "has something to do with the homicide."

Hall said authorities don't yet have a specific search area, as they are uncertain which direction Easley might be heading or how far he might have gotten. They have asked anyone with information to call 911 or Roanoke County police at 540-777-8641.