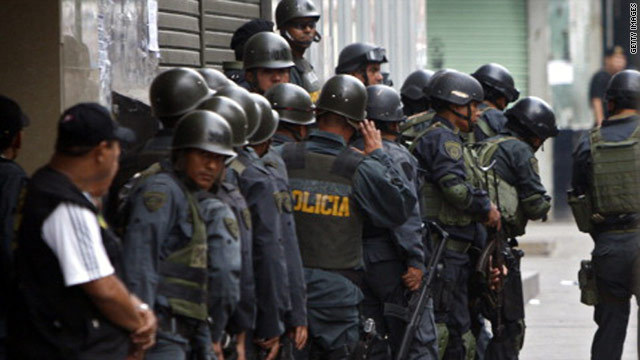 Police officers take position outside a bank in Lima, Peru, where a man was holding 33 people hostage on Friday.
STORY HIGHLIGHTS

(CNN) -- Two hostages were injured at a bank in Lima, Peru, before a police sniper killed a man who held 33 people there for seven hours, state media reported.

"This opening allowed us to get in position, use authorized weapons and end this drama," he said.

The man threatened staff and clients at the downtown bank with a gun and an explosive strapped to his chest, the news agency reported. He demanded 2 million soles ($714,000) and a helicopter as a condition for their release.

At least two hostages were wounded in the standoff, Hidalgo said -- one with a gunshot wound and another who was injured after being hit in the head with a revolver.

Hidalgo praised the rescue operation, saying the gunman had been "uncompromising" and left police no choice but to shoot him.

A bomb squad entered the bank after hostages had been evacuated to detonate the explosive the gunman had used to threatened the hostages, Andina reported.

The bank is located in Gamarra, Lima's textile and garment district, a poor part of the city with a high crime rate.