Another violent death at Disney community in Florida 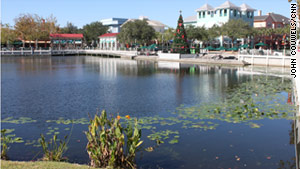 (CNN) -- A Disney-developed community in central Florida saw its second instance of deadly violence this week when a resident turned a gun on himself during a standoff with a SWAT team, authorities said Friday.

The death followed an unrelated case Monday in which the community of Celebration recorded its first homicide in its 14-year history, authorities said. The discovery of 58-year-old Matteo Giovanditto in his home was deemed a homicide. His car was found 10 miles away in Kissimmee, Florida.

The standoff that resulted in suicide ended at 2:20 a.m. Friday when the SWAT team entered the home of Craig Foushee, 52, and found him dead from a self-inflicted gunshot wound, said spokewoman Twis Lizasuain of the Osceola County Sheriff's Office.

The incident began Wednesday when authorities received a report of a distraught man with a gun, and Foushee and authorities came in contact through his cell phone, police said. Foushee was undergoing a separation with his wife, with whom he has children, Lizasuain said.

In his cell phone calls with police, Foushee indicated he was going to harm himself, Lizasuain said.

Authorities could not locate Foushee on Wednesday, but they ordered nearby Celebration Elementary School to undergo a temporary lockdown, Lizasuain said.

After Foushee returned home Thursday morning, the standoff began, and authorities again locked down the school a quarter mile away, police said.

Foushee indicated he would exit the house, police said.

"They had constant communication with him throughout the day, where he agreed to come out and speak to deputies, but he never did that," Lizasuain said.

Foushee fired gunshots several times, including when a SWAT team breached the door and inserted a camera-bearing robot into the house, Lizasuain said.

"I don't know how many times he fired shots," she said. "Deputies never fired shots back at him."

Through the robot's camera, officers were able to see Foushee's movement inside the house.

After 14 hours of negotiations, the tactical unit fired tear gas into the house, Lizasuain said.

When Foushee didn't respond to communications for more than two hours, the SWAT team entered the residence and found his body, Lizasuain said.