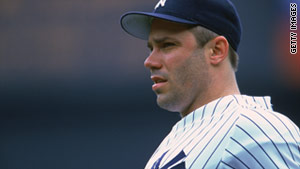 Jim Leyritz was a star for the New York Yankees during the 1990s.
STORY HIGHLIGHTS

Leyrtiz had faced up to six months in jail after his November conviction for driving under the influence, but he was spared the prospect of up to 15 years in prison when jurors acquitted him of DUI manslaughter.

"I am telling you now that if you violate probation, I will give you the maximum jail sentence," Broward County Circuit Judge Marc Gold told Leyritz on Thursday.

Leyritz was convicted of driving drunk in the December 2007 accident that killed 30-year-old Freida Veitch. The wreck occurred after he had spent his 44th birthday with friends in Fort Lauderdale bars, and tests after the accident indicated he had a blood-alcohol level of 0.14 percent -- well above Florida's legal limit of 0.08.

Leyritz: 'No winners in this case'

"That night -- my birthday -- and every year, I will remember that night, your honor," a tearful Leyritz told the judge.

Leyritz played most of his 11-season major-league career with the Yankees, hitting a clutch home run against the Atlanta Braves in Game 4 of the 1996 World Series that helped propel New York to the championship. He also played with the San Diego Padres in the 1998 World Series against the Yankees.

Prosecutors had argued for four months jail time in addition to a year of probation, but defense attorney David Bogenschutz argued that the offense was the first for Leyritz. Gold also imposed a $500 fine, the state's maximum, and revoked Leyritz's drivers license for six months.

The victim's husband, Jordan Veitch, said Leyritch's conduct "shows a lack of respect or the lives of others."

Freida Veitch also was drunk -- with a 0.18 blood alcohol level -- and was not wearing her seat belt, according to court documents. Jordan Veitch acknowledged that his wife could have faced charges had she survived, but, "She did not have an opportunity to be judged."

"Mr. Leyritz will be able to kiss and hug his children again. He will be able to go on being a parent," Jordan Veitch said. "Frieda will never have that chance to do any of these things again."