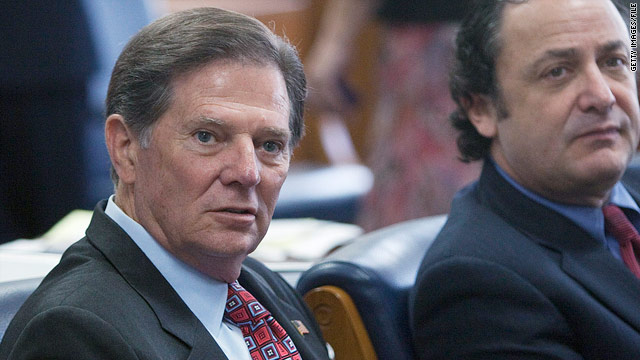 DeLay was found guilty of money laundering and conspiracy to commit money laundering, court bailiff Gilbert Soto said. He was accused of funneling $190,000 to help elect Republicans to the state House and Senate in 2002.

At the outset of the trial, DeLay predicted the jury would clear him, and he remained unrepentant after learning the verdict.

"This is an abuse of power. It's a miscarriage of justice," DeLay told reporters. "I still maintain that I am innocent, that the criminalization of politics undermines our very system, and I'm very disappointed in the outcome. But you know, it is what it is, and we will carry on and maybe we can get it before people who understand the law."

Travis County District Attorney Rosemary Lehmberg said the verdict showed no one was above the law.

"This case is a message from the citizens of the state of Texas that the public officials they elect to represent them must do so honestly and ethically, and if not they'll be held accountable," Lehmberg said.

DeLay's sentencing was set for December 20, and he faces a possible maximum prison term of 99 years on the money laundering charge and 20 years on the conspiracy charge.

Two other men facing charges in the case are awaiting trial.

DeLay stepped aside as majority leader after his 2005 indictment on the money laundering and conspiracy charges and resigned from Congress the following year. He fought the charges on procedural grounds for several years, seeking unsuccessfully to have the trial held in his home county in suburban Houston instead of in the state capital, Austin, and blaming the indictment on a partisan prosecutor.

In August, DeLay told CNN that his legal bills have topped $8 million.

Despite his legal troubles, DeLay found time last year to appear as a short-lived contestant on the television show "Dancing with the Stars." He dropped out of the demanding dance competition due to stress factors in both feet.