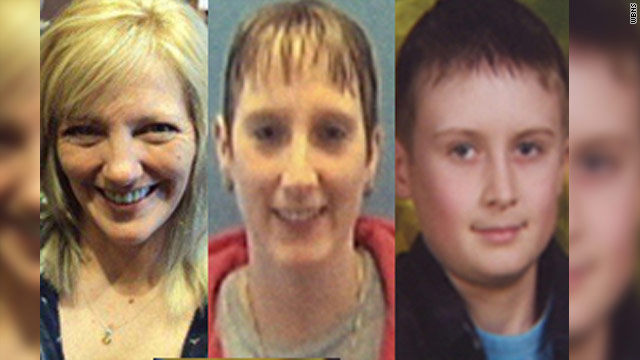 The remains of Tina Herrmann, 31, her son, Kody Maynard, 11, and Stephanie Sprang, 41, were found in garbage bags in the hollow of a tree in Kokosing Lake State Wildlife Area in Knox County, Ohio, authorities said Thursday.

The three had been missing since November 10, along with Herrmann's 13-year-old daughter, prompting a weeklong search throughout the rural region. The girl, Sarah Maynard, was found alive last Sunday, bound and gagged in the basement of a Mount Vernon residence, about 20 miles from the Herrman's central Ohio home.

The man who lived in the home, Matthew Hoffman, was arrested and faces a kidnapping charge in her abduction. He allegedly directed authorities to the missing people.

"His information led to the location of the bodies," Knox County Sheriff David Barber said Thursday, while announcing the discovery of the remains.

The three were attacked with a knife and stabbed multiple times in the back and chest, causing them to bleed to death, Knox County Coroner J.F. Ogle said in a statement Saturday.

There were no signs of sexual assault and the location of the deaths is pending further tests, she added. The final coroner's report will be released in six to eight weeks, after a full forensic examination by the Licking County Coroner's Office.

"Our entire community has been wounded in this tragedy and words can't describe the sorrow felt by all. However, I have seen this community rise up and challenge itself to greatness since the beginning of this ordeal," Ogle said. "Knox County is one of the warmest, kindest, and most beautiful communities I have ever witnessed, and I firmly believe that no one person can ever steal that away from us."

Herrmann failed to report to work at a Dairy Queen in Mount Vernon on November 10, Barber told CNN affiliate WBNS. A deputy twice went to her home in Howard, about nine miles east of Mount Vernon, and saw her pickup there. No one answered the door, though lights were on in the home.

Later in the week, blood was found in the home, leading authorities to suspect foul play.

Sarah Maynard was found in an early morning raid involving a SWAT team. She was released from the hospital Monday, after being evaluated and treated for injuries, the sheriff said.

Hoffman, her alleged captor, is in custody, awaiting a preliminary hearing scheduled for November 23 on the kidnapping charge.

The incident was not a home invasion, the sheriff said, adding that "either they knew Hoffman or Hoffman made himself known to them."

When asked earlier this week if officials took the death penalty off the table in order to find the bodies, Knox County prosecutor John C. Thatcher responded that he could not say whether Hoffman confessed to the killings.

He said he expects to take the case to the grand jury in four to six weeks.