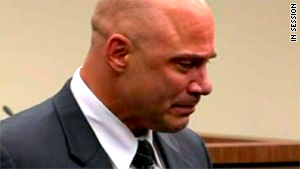 Jim Leyritz 'is the most happy man now,' his mother, Betty Leyritz, said Saturday, after the verdict was announced.
STORY HIGHLIGHTS

An emotional Leyritz was handcuffed until the verdict was read, then went over to thank each of the six jurors and was later released on bond. The ex-baseball player could still face a maximum of six months in prison, but that's far short of the 15 years he could have faced for hitting and killing 30-year-old Freida Veitch while driving drunk.

"He's free," said his mother, Betty Leyritz. "He is the most happy man now."

The verdict followed a busy Friday, the first day that the jury of five men and one woman began deliberations. Judge Marc H. Gold first tossed out a count of DUI manslaughter based on impairment, finding insufficient evidence for the charge to go to the jury.

Later, at 6 p.m., the jury sent a note to Gold saying they had reached a stalemate. "We have completely decided that we will not agree on this decision," the note said. "How do we proceed?"

Gold asked the jurors to continue talking, and they deliberated for another hour Saturday before reaching a verdict. Three jurors said Saturday that they had only taken 45 minutes to decide to acquit Leyritz of manslaughter.

A single juror -- Sharon Wessinger -- held out, wanting to also acquit him on the drunk driving charge, but she changed her mind Saturday.

After the verdict, Leyritz came over to three of the jurors, talking to them and showing them pictures of his three sons, of whom he's the primary custodial parent. Wessingerthen explained to him her change of heart Saturday morning, in siding with the other jurors and convict him on the drunken driving charge.

"The thought of it going into another trial later and you possibly being convicted of manslaughter, when we weren't doing that, I couldn't let that happen," Wessinger said.

Jury foreman Brian Haul told CNN's siter network TruTV that, while all six people quickly agreed Leyritz wasn't guilty of the greater charge, they felt compelled to hold him responsible on some grounds.

"Are we going to go in front the public and say it's OK to have four or five drinks within an hour or so period of time and then hit the road? I think that was the deciding factor," he said.

Prosecution and defense will meet December 1, to settle on a sentencing date on the drunken driving charge. Until then, Leyritz is free on bond and required to breath into a device every time he gets behind the wheel.

According to court documents, the incident began as a 2007 night-time celebration for Leyritz, who was ringing in his 44thbirthday with friends by bar-hopping in Fort Lauderdale.

While driving a friend home shortly after 3 a.m. on December 28, 2007, his red 2006 Ford Expedition hit the vehicle of 30-year-old Freida Veitch. She was thrown from her dark green 2000 Mitsubishi Montero.

Blood drawn from Leyritz three hours later showed he had 0.14 percent blood alcohol level, above the 0.08 legal limit in Florida. He also failed field sobriety tests, according to police.

Veitch was also drunk -- with a 0.18 blood alcohol level -- and was not wearing her seat belt, according to court documents.

Leyritz played 11 years in the major leagues, including all or parts of eight seasons with the New York Yankees. His career highlight came in 1996, when he hit a winning home run in game four of the World Series. He also hit pivotal homers during the 1995, 1998 and 1999 postseasons.

He remained in the limelight after his career ended in 2000, appearing on national and New York-based radio programs. Leyritz admitted that he'd used amphetamines in his playing days.

After his arrest, the twice-divorced Leyritz told truTV's In Session, he lost his job as a sports commentator and lost an endorsement deal, leaving him to rely on loans from friends and reporters.

His girlfriend, Michelle Caruso, say Leyritz was "terrified this morning," and happy about the verdict.

"He was worried about a hung jury," she said. "I'm just so happy that his kids have their dad back."

In Session's Grace Wong contributed to this report.