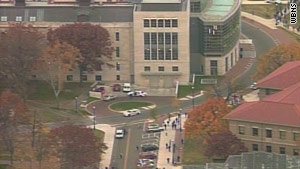 (CNN) -- Four buildings on The Ohio State University campus were evacuated Tuesday after the FBI's Columbus, Ohio, bureau notified the university it had received an anonymous message that explosives were placed in the buildings, authorities said.

The buildings are the William Oxley Thompson Memorial Library, the McPherson Chemical Lab, Smith Laboratory and Scott Laboratory. Classes in the three academic buildings involved were canceled, and all four buildings were closed until at least 5 p.m. or until the investigation is complete, according to Vernon Baisden, the university's director of public safety.

Officials did not say whether any explosives had been found in the buildings.

The university was notified of the threat at 8:19 a.m. and activated its Buckeye Alert System at 8:41 a.m., according to a message posted on the Ohio State website.

Local, state and federal authorities were assisting in the investigation, Baisden said, but he said officials could release few details about specifics. Aerial footage showed authorities with dogs entering one of the buildings.

Students and employees "responded in an orderly fashion," Baisden said, "and we have no reports of any real confusion, other than the fact that everybody was wondering what was going on."

Asked whether the threat was targeting labs, Baisden noted that labs are located in many locations on the Ohio State campus.