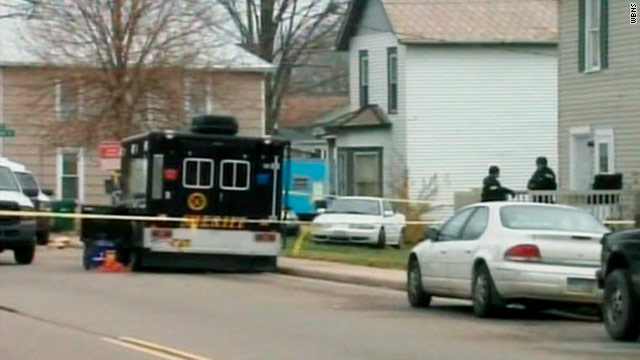 Read more about this story from CNN affiliate WBNS.

(CNN) -- Officials searching to find a missing Ohio woman, her 10-year old son and a family friend more than five days after they disappeared said they want to remain optimistic, but can't ignore the evidence, according to the Knox County Sheriff's Department.

"We have to be realistic about the possibility that these folks are dead," Sheriff David Barber said Monday in Mount Vernon.

Barber said authorities were fortunate to find 13-year old Sarah Maynard on Sunday morning, but said blood evidence found in Herrmann's home coupled with the amount of time the three have been missing makes the situation more serious.

Maynard was found in an early morning raid involving a SWAT team and was released from the hospital Monday, after being evaluated and treated for non-life-threatening injuries, the sheriff said.

"Sarah is with family and is doing well." said Barber. "She is a very brave little girl, " he said.

While Barber would not go into details about the conversations Maynard had with police, he told reporters that Maynard remembered seeing her attacker inside the house while everyone was at home.

"The investigation shows that all four of them didn't leave by their own choice," Barber said.

Matthew Hoffman, 30, who lives in the home where Maynard was found, was taken into custody after the raid, Barber said. He faces a kidnapping charge and is not cooperating with the investigation, Barber said.

Police said they do not believe Hoffman was working with an accomplice. When asked whether the incident was a home invasion, Barber said it was not, but added that "either they knew Hoffman or Hoffman made himself known to them."

On Monday, investigators asked the public to call a tip line with any information.

Herrmann failed to report to work at a Dairy Queen in Mount Vernon, in central Ohio, on Wednesday, Barber told CNN affiliate WBNS. A deputy twice went to her home in Howard, about nine miles east of Mount Vernon, and saw her pickup there. No one answered the door, though lights were on in the home.

A Dairy Queen manager went into the home on Thursday and found blood inside, Barber told the station.

The children were in school Wednesday, but not Thursday, the sheriff said. Sprang's car was found at Herrmann's home.

Asked about Hoffman's criminal record, Barber said he served prison time for an arson conviction in another state. He added authorities think Hoffman could "absolutely" lead police to the three missing people.

"He was just different. He was odd. He just climbed trees and watched us," she said Hoffman.

Mount Vernon is about 50 miles northeast of Columbus, Ohio.