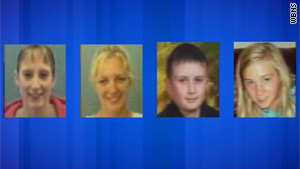 (CNN) -- Authorities and residents in rural Ohio searched Saturday for two women and two children who have been missing for several days.

The sheriff described their disappearance as a missing persons case.

"Detectives are interviewing family members, friends and acquaintances," Barber told CNN affiliate WBNS on Saturday. "Right now, there is no indication that they were abducted."

Herrmann failed to report to work at a Dairy Queen in Mount Vernon, in central Ohio, on Wednesday. A deputy came twice to the house and saw Herrmann's pickup truck. Lights were on in the house, but no one answered the door, Barber said.

"There were no signs of anything out of place," he said.

A Dairy Queen manager entered the home on Thursday and discovered the blood.

"There is blood in the house. There is a sign of injury to a person or persons," Barber said Friday.

Herrmann's truck was discovered Thursday night near Kenyon College in Gambier, he said. On Friday morning, the college lifted a lockdown it had put in place late Thursday "as a precaution because of concerns that a person of interest in the disappearances might have been on campus."

The children were in school Wednesday, but not Thursday, the sheriff said. Sprang's vehicle was found at Herrmann's house, he added.

State and federal agencies are assisting in the search, happening about 60 miles northeast of Columbus.

Larry Maynard, the father of the children, spoke with WBNS. "I am expecting the worst, hoping for the best," he said.

Barber said Herrmann's live-in boyfriend, Greg Borders, will be interviewed. Borders is not considered a suspect or person of interest, the sheriff said.

Borders told WBNS that he left for work early Wednesday and then spent the night at a friend's house in Urbana, Ohio.

Borders said he would never hurt Herrmann or her children.

He told CNN affiliate WSYX he had recently broken up with Herrmann but still lived in her home.

Messages left Saturday afternoon for Barber were not immediately returned.

Members of the close-knit community were gathering at a prayer service Saturday evening.

"There's a lot of anxiety," about the four people's fate," said Pastor Todd Miller of Amity-Apple Valley Baptist Church in Mount Vernon, about five miles from Howard. "I don't think anyone is trying to speculate."

Kody Maynard has attended the church with a friend, Miller told CNN. "He is very nice, very polite and quiet."

Members of the church spent eight hours Saturday assisting in the search, the pastor said.

"It has touched our church," he said.