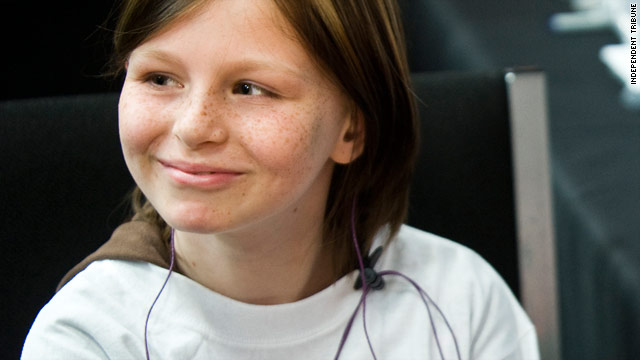 Get the very latest details in the search for Zahra Baker tonight on "Nancy Grace" at 8 & 10 p.m. ET on HLN.

(CNN) -- The search for a freckle-faced 10-year-old North Carolina girl is over, with police announcing Friday that they had found her remains.

Adkins said that DNA from a bone dug up off Christie Road in Caldwell County -- the same place Zahra Baker's prosthetic leg was recovered late last month -- was consistent with that taken from the girl's personal items in her Hickory home, about 15 miles away.

The North Carolina State Bureau of Investigation will create a complete DNA profile of Zahra, using samples taken from her biological father and mother, to confirm they match the Caldwell County remains, according to Adkins. While there will be no confirmation until those tests are completed, Adkins said Friday that medical examiner's staff at the Dudley Shoals Road site said the remains found there "were consistent with a child."

"Investigators, agents, officers and staff who have worked on this case are devastated that they were not able to find Zahra alive and bring her home safely," Adkins said.

The girl's stepmother, Elisa Baker, reported Zahra missing on October 9. Elisa Baker was arrested the next day, after police said that she admitted writing a fake ransom note found at the family's home in Hickory. But no one other than a relative had seen Zahra since September 25, according to authorities, when a woman said she saw the girl at a furniture store.

In mid-October, police announced they were treating Zahra's disappearance as a homicide.

The disappearance of Zahra made international news. The girl, whose biological parents were both from Australia, lost part of her left leg at age 5 and lost hearing in both ears while being treated for cancer.

The girl's father, Adam Troy Baker, was arrested late last month in nearby Catawba County on eight charges: five counts of writing bad checks and three counts of failing to appear in court. Authorities said that the charges were unrelated to Zahra's disappearance, and he was later released on bail.

His wife, Elisa Baker, remains in jail. Besides an obstruction of justice charge for the ransom note, she was accused of writing worthless checks. Police said that she has been cooperating with investigators, including going with them to the Dudley Shoals search site.

"Most of the family's reaction is we're heartbroken and dealing with probably a lot of anger, too," said Fairchild. "She's made her way into everyone's heart. She was a special girl and she will definitely be missed."

Friday's announcement is the most significant, but not the first major development in the search for Zahra's remains. On October 27, investigators announced they had found the 10-year-old's prosthetic leg in a brushy area off Christie Road. And earlier this month, authorities reported finding the bone that Adkins said Friday belonged to Zahra.

Zahra's biological mother, Emily Dietrich, who has not seen her daughter since she was an infant, arrived in North Carolina on Thursday. Dietrich was emotional as she kneeled outside a makeshift memorial at the Baker home, CNN affiliate WCNC reported.

At Friday's news conference, Adkins stressed that "this is still a developing case" and that investigators would continue to gather evidence. No one has been charged with a crime directly related to Zahra's disappearance and death.