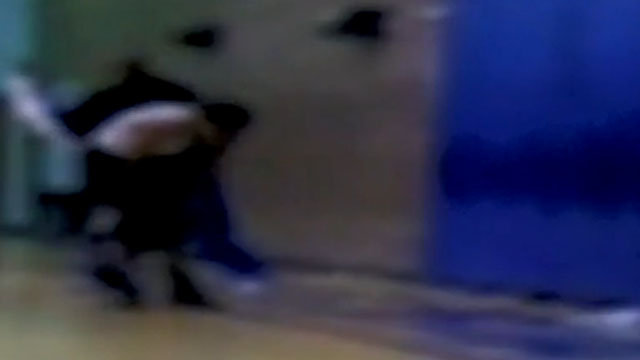 (CNN) -- A Jackson, Mississippi, high school basketball coach is accused of whipping students for "failing to run basketball plays correctly," according to a federal lawsuit filed this week by three students.

Coach Marlon Dorsey acknowledged he "paddled" students, but he defended it as a way to "save these young men from the destruction of self," the court filing said.

A school district spokeswoman and its attorney would not confirm whether Dorsey has been suspended, but he has not shown up to teach or coach at Murrah High School in recent days, according to the students' lawyer. The suspension was apparently for 28 days without pay, attorney Lisa Ross said.

The students are still attending classes and are playing on the boy's varsity basketball team, Ross said.

One senior was whipped "daily and sometimes more than once daily by striking him three times across his buttocks each time" with a "five to ten pound weight belt," the suit said.

One beating was captured on video, the suit said.

In a Thursday statement, Edwards indicated the matter has been resolved.

"In taking action, the school district considered the seriousness of the circumstances, prevailing policy, input and concerns from parents and the athletes involved, and Coach Dorsey's overall employee performance record. Since this is a personnel matter, no further details will be provided to the public by the school district. We do not want to violate Coach Dorsey's privacy rights. However, you may be assured that this situation has been addressed."

The three students were beaten for "no legitimate purpose whatsoever," but Dorsey accused them of "failing to run basketball plays correctly," the suit said.

"He told them they had the choice to accept the licks without complaining to anyone or forfeit the opportunity to play basketball for their high school team," it said.

Dorsey has not commented to CNN, but the lawsuit filing included a statement issued by the coach after the whipping allegations hit the news media.

"I paddled my students... today, some of [sic] students have lost pride in their school and in their (sic) selves. Students are disrespecting teachers, administrators and other students by stealing cell phones, leaving off campus without permission, disrupting classroom teaching time, late for class and not following dress codes by wearing the pants on their butts and house shoes to school and on-court behavior. I took it upon myself to save these young men from the destruction of self and what society has accepted and become silent to the issues our students are facing on a daily basis."

Principal Freddrick Murray is also named as a defendant. The suit claims that students and parents told him about the whippings, but he failed to investigate or stop them.