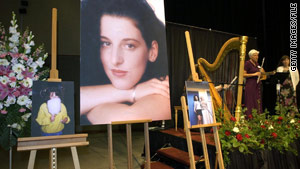 Chandra Levy's body was found in Washington's Rock Creek Park in 2002, more than a year after her disappearance.
STORY HIGHLIGHTS

Washington (CNN) -- Former U.S. Rep. Gary Condit's semen was found on underwear belonging to Chandra Levy, according to an FBI biologist testifying Wednesday in the trial of Ingmar Guandique, who is accused of murdering the Washington intern in 2001.

The panties were retrieved in May 2001 by investigators searching Levy's apartment in the days after her parents reported her missing. Her body was found over a year later in Washington's Rock Creek Park.

The testimony addresses the question of whether Condit, a sitting congressman from California at the time Levy vanished, was having an affair with the intern, who had just turned 24 when she disappeared.

The decade-old mystery of Chandra Levy

Regarding lab tests of the underwear recovered from Levy's apartment, Giusti said that "the sperm DNA profile was compared to and matched to Gary Condit."

Condit, who testified in the trial on November 1, has refused to address the question of whether he had sex with Levy.

"We've lost our feeling for common decency," Condit told prosecutor Amanda Haines when she asked in court if the two had been intimate. "I didn't commit any crime. I didn't do anything wrong."

The disappearance of Levy, then an intern for the federal Bureau of Prisons, drew national attention after her parents discovered a connection with Condit. The congressman was never a suspect in the case, but was questioned intensively for details as to Levy's whereabouts.

Prosecutors believe Guandique, a reputed member of the Salvadoran gang Mara Salvatrucha, attacked Levy while she was jogging and then killed her when she began to scream.

Guandique denies that he attacked Levy. There has been no physical evidence linking him to the assault, leaving prosecutors to base their case largely on Guandique's alleged jailhouse admission that he killed the young intern.

Partly as a result, prosecutors on Wednesday asked the trial judge to drop two of the six counts against Guandique, including a count of first degree sexual assault. He is still, however, facing first degree murder, kidnapping, and robbery charges.

The judge rejected a defense motion to acquit Guandique on the remaining counts.