Elizabeth Smart says captor treated her 'like an animal' 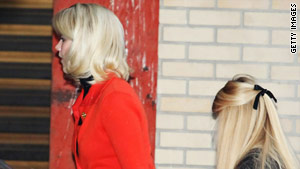 For additional coverage of this trial, check out CNN affiliates KSTU and KSL.

He said he planned for months how he would snatch her so she could join him and his wife in a "celestial" plural marriage, Smart testified.

"He said they had been preparing for me since he saw me," she said.

It was the fall of 2001, and he was panhandling outside a mall in downtown Salt Lake City, Utah. Smart said she was with her mother and five brothers and sisters, shopping for school clothes.

"My mother gave gave him five bucks," Smart told told the jury. Mitchell was hired by her mother to fix a leaky skylight and rake leaves. Smart saw him around the house that fall but never spoke to him, she said.

Before dawn on June 2, 2002, she awoke to the sound of a man's voice and a cold sharp blade against her throat.

"I remember him saying, 'I have a knife to your neck. Don't make a sound. Get out of bed and come with me or I will kill you and your family,'" Smart testified.

He led her in her red silk pajamas up a trail into the rugged back country and over a ridge, hiking what she estimated to be three to five hours to a crude campsite. There, she said, he "sealed" her to him as his wife and raped her.

She said she begged him to stop, pleading, "I'm just a little girl." She struggled, but she said at age 14 she was was no match for a grown man.

Afterwards, she cried herself to sleep.

The next day, as she cried again, he told her she was "lucky," Smart testified. He said he was a prophet and that God had chosen her to be by his side as he prepared for the second coming of Jesus Christ. She said she didn't feel lucky at all.

"I felt like I had a burden the size of a mountain to carry around with me the rest of my life," Smart said.

Now 23 and living in Paris, France, Smart spent much of the day on the witness stand Monday, beginning a detailed description of her nine months of captivity with Mitchell and his wife, Wanda Barzee.

She spoke of being raped "daily at the very least," tethered between two trees "like an animal," and forced to watch and participate in sex acts she found repugnant. She said she was forced to smoke cigarettes and drink wine and "hard liquor."

She did not have to face her alleged abductor on Monday. Mitchell, 57, loudly sings hymns whenever he is in court. He had been ejected, as usual, from the courtroom and was watching the trial from another room. He is charged with kidnapping and taking a minor across state lines for sex. If convicted, he faces life in prison.

Mitchell's attorneys do not dispute what happened but say their client was insane at the time of the alleged abduction, and therefore not reponsible for his actions.

"You'll have to ferret out not only what happened, but why it happened," attorney Parker Douglas told jurors earlier Monday.

"We're asking you to determine what was in someone's mind. This is made difficult with a crazy mind. The easy explanation is not always the correct one."

He described his client as "a crazy person who comes in the middle of the night" -- exactly what we are taught to fear as children, he said.

Smart told the jury she thought about running away that first morning, despite the threats against her life and her family.

"I didn't want to spend another day with him. I never wanted to see him again," she said. "I'd seen what he had done to me. I'd seen how he had come in and taken me from my the bed, the place I thought was the safest place in the world, in my home, with my sister beside me."

She continued, "I felt that because of what he had done to me, I was marked. I wasn't the same. My personal value had dropped. I was nothing. Another person could never love me and and I felt, yeah, I could take the risk of trying to escape and being killed."

Later, after the shock began to wear off, she said she thought about her parents and the life she had before.

"I decided my parents would always love me despite what he did to me," she told the jury. "I hadn't changed. I was still a person of worth ... I decided to live."

After that, she began to go along with what Mitchell told her to do. She was compliant. She listened, and even began to mimic his speech and his ways.

Earlier Monday, Smart testified about the night of her abduction.

"I thought I was having a nightmare," she said of being led away by a bearded man in dark clothing and a stocking cap. "It was indescribable fear."

Smart's younger sister Mary Katherine, who witnessed the abduction, testified about awakening her parents with the words: "Elizabeth is gone."

Also testifying Monday was the Smarts' mother, Lois. She spent less than an hour on the witness stand, recalling how the family hired Mitchell -- who then called himself Immanuel -- to do odd jobs.

But most of her testimony focused on hearing the news that her daughter had been taken.

"(Mary Katherine) said that a man had taken Elizabeth with a gun and we wouldn't find her," Lois Smart testified. "He took her either for ransom or for a hostage."

As her husband, Ed, searched the house, Lois Smart said, she ran downstairs, turned on the lights, and saw that the kitchen window was open, its screen cut. She testified she had opened the window the previous evening when she burned some potatoes while making dinner.

"My heart sank and I called out to Ed, 'Call 9-1-1,'" she testified. "It was utter terror. It was the worst feeling, knowing that I didn't know where my child was. I was helpless."

As her family frantically searched the house, Elizabeth testified, she was being led at knifepoint on the strenuous hours-long hike to a hillside encampment.

Suddenly, she recognized his face, she testified, and the name Immanuel came to her. She said she asked why he would do this. "My parents had only tried to help him," she said.

"He told me he was going to hold me for ransom, and I told him my parents would pay any amount to have me back."

Smart was found nine months after her abduction, walking on a street in the suburb of Sandy, Utah, in the company of Mitchell and Barzee.

As part of her plea agreement, Barzee agreed to cooperate in the state and federal cases against her husband.

In Session's Jean Casarez and Lena Jakobsson contributed to this report.