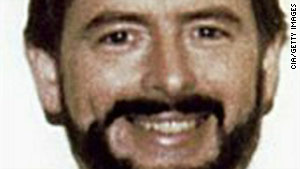 (CNN) -- A former CIA officer already serving a 23-year sentence for spying for the Russians is facing more time in prison after pleading guilty to continuing his espionage activities from behind bars.

Harold James "Jim" Nicholson, 59, changed his plea to guilty Monday at a federal court hearing in Portland, Oregon, the Justice Department said in a statement.

Nicholson pleaded guilty in 1997 to spying for Russia and is the highest-ranking CIA officer ever to be sentenced for espionage. While serving his prison sentence in Oregon, prosecutors allege, Nicholson restarted his career as a double agent and enlisted his son Nathan in his efforts to collect money owed to him by the Russian spy services and to sell more secrets.

Under terms of Nicholson's plea agreement, prosecutors will ask that Nicholson be sentenced to eight years in prison, to be served consecutively to his current sentence, authorities said. Sentencing is scheduled for January 18.

According to an indictment, Nicholson passed his son notes in prison and instructed him how to reinitiate contact with his old spymasters. Nicholson admitted providing his son with information meant for Russia, prosecutors said Monday.

Nathan Nicholson made trips to California, Mexico, Peru and Cyprus, where he met with Russian government representatives who gave him payments totaling more than $35,000 in cash, according to the indictment.

At his father's request, Nathan Nicholson allegedly shared the money with his sister and grandparents. Nathan Nicholson had complained to his father that he and his sister were short of money to pay for college, prosecutors said. Jim Nicholson told his son that his alleged spying activities "were 'risky' but not 'illegal,' " the indictment said.

"Harold Nicholson has admitted not only betraying his country -- again -- but also betraying his family by involving his son Nathaniel in his corrupt scheme to get more money for his past espionage activities," Dwight C. Holton, U.S. attorney for Oregon, said in the statement.

An attorney for Jim Nicholson did not return CNN's calls Friday.

According to court testimony, Nathan Nicholson, who is a former U.S. Army paratrooper, initially told authorities that he had traveled overseas to visit "a battle buddy." FBI agents informed Nicholson that lying to them was a federal crime and offered him a "mulligan," or a chance to change his story, according to an agent's testimony. At that point, FBI Special Agent John Cooney testified, Nicholson became more "forthcoming" about his meetings with Russians.

Nathan Nicholson pleaded guilty to his role in the intrigue last year but has not been sentenced. He was expected to have testified against his father at trial.

In court filings, the elder Nicholson appeared ready to fight the new charges and threatened to use his knowledge of the inner workings of U.S. intelligence against the government.

"At my trial, I will possibly have to give some insight in my defense that could make things get a bit hot in D.C.," Nicholson wrote to his daughter in a September 2010 letter that is part of the court record. "Some organizations may get burned," he wrote. "I don't understand why they would want to bring that upon themselves just to exact petty vengeance on me."