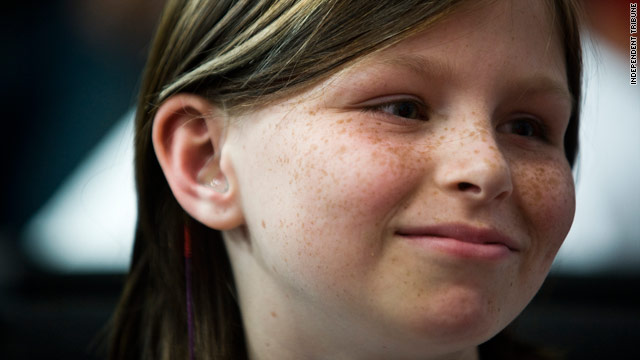 A serial number that was extracted from a prosthetic leg matches the limb belonging to Zahra Baker.
STORY HIGHLIGHTS

(CNN) -- Police on Monday confirmed that a prosthetic leg discovered last week in a brushy area off a North Carolina road belongs to a missing 10-year-old girl.

A serial number that was extracted from the prosthetic leg matches the limb belonging to Zahra Baker, the Hickory, North Carolina, Police Department said.

Police launched a search for Zahra on October 9, but no one other than a family member has reported seeing her since September 25, when a woman saw her at a furniture store. The girl's disappearance is now being probed as a homicide.

Prosthetic leg thought to be Zahra's

Zahra, a freckle-faced youngster, lost her leg to bone cancer at age 5 and developed lung cancer a few years later, according to CNN affiliate WCNC.

Meanwhile, authorities continued Monday to search the Hickory home that Zahra lived in with her father, Adam Troy Baker, and her stepmother, Elisa Baker.

The disappearance of Zahra, who had persevered through her health battles and wore hearing aids, has made international news. Police said Elisa Baker admitted that she planted a fake ransom note the day after the girl's disappearance was reported.

Initially arrested on October 10 on several charges unrelated to Zahra's disappearance, including writing worthless checks, Elisa Baker was additionally charged with obstruction of justice for leaving the note. That charge is a felony. She is now cooperating with investigators, Hickory police have said.

Zahra's father was arrested last week in nearby Catawba County on eight charges, including five counts of submitting worthless checks and three counts of failing to appear in court.

Police earlier acknowledged that Adam Baker faced bad-check charges unrelated to the disappearance of his daughter. But they did not initially arrest him, as he had been helping authorities in their search.