Slain teen's mom: 'How are these punks beating us?' 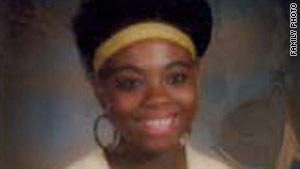 Phlisia Bunting's body was found 200 miles from her Denver, Colorado, home in 1990.

(CNN) -- Phlisia Bunting's body was found dumped in a Colorado state park two months after she finished her freshman year in high school.

That first year of high school had been socially challenging for Phlisia, who at 16 "was quite different or unique," according to her mother, Carrelyn Bunting.

"She didn't know how to handle her uniqueness," Bunting recalled. "She was persecuted by the kids in the school."

Phlisia had won a costume contest for dressing up as her pop idol, Boy George, even painting her face white to pull off the image. It didn't help her popularity, Bunting recalled.

"That did not go over well for a black girl in an all-black school," she said.

But, despite her social difficulties, Phlisia was a good student, said Sgt. Henry Stoffel of the Mesa County Sheriff's Office.

"She hit her teenage years and started hanging with some kids who were on the streets," he said. "So many of the street kids we've seen are into drugs, and we have no history of her involved in drugs or alcohol."

Bunting, determined to help her daughter in any way she could, began attending counseling sessions with Phlisia at Urban Peak, a youth assistance organization in Denver.

"She seemed to enjoy it, the fact that I'd come down," Bunting said.

It was after one of the counseling sessions, on July 18, 1990, that Phlisia pleaded with her mother to let her stay a few hours longer. "I had to get back to work, and she said, 'Please, I promise. I'll go home,' " Bunting said.

It was the last time she saw her daughter alive.

Two days later, a maintenance worker in Grand Junction stumbled upon Phlisia's lifeless body. It was partially submerged in a man-made lake more than 200 miles from Phlisia's home in Denver.

She was face down, with her upper torso and head submerged in the water.
--Sgt. Henry Stoffel

"Originally it was just a body of a black female that was found," Stoffel said.

The lake at Colorado State Park, Island Acres, is about a third of a mile off Interstate 70. It was gated and under construction at the time.

"She was face down, with her upper torso and head submerged in the water," Stoffel said. A rock had been placed on her head.

Whoever took Phlisia to the pond had to carry her, because no vehicles were allowed in the park.

But police say they know how Phlisia got to Island Acres. The day before her body was found, Phlisia went to the park with three other teenagers in a stolen vehicle.

"They were arrested in Boulder for being in possession of the stolen car, and around that same time, we are notified of the body in the park. No one knew they were connected," Stoffel recalled.

"Once we find out who Phlisia is, we contact her mother, and she gets us in touch with Urban Peaks."

"We know they make it to Island Acres from information we got through interviews," Stoffel said. "And we know that all four arrived at Island Acres, but only three of them left."

After 20 years, no one has been arrested or tried in Phlisia's death.

Despite statements made to police by witnesses who identified a 19-year-old as the person who caused Phlisia's death, and his subsequent arrest, he was never charged and prosecutors dropped the case.

"They didn't feel they had enough evidence for conviction at trial," Stoffel said.

One of the problems, according to Stoffel, was that the stolen vehicle was returned to its owner before law enforcement knew it might be linked to a homicide. The hot, dry climate in Grand Junction was not favorable to finding fingerprints.

Phlisia's exact time of death is unknown. However, police say she died less than 18 hours before her body was discovered, leaving enough time for the three teens to drive back to Denver.

Stoffel said he hopes that a re-examination of physical evidence will lead to an arrest and conviction.

"Over the last couple of years, we've been hoping new technology will help us figure out what happened there," he said. "Hopefully, the physical evidence will tell us who is telling the truth."

Bunting said she wants the case resolved and has a hard time knowing that the person responsible for her daughter's death has evaded justice all these years.

"How else do we prevent this from happening again to someone else?" she asked. "Anybody that has expertise in this field, anywhere in the world that reads this ... if they would offer their expertise, we need their help."

"This is not a difficult case to solve or prosecute," she added. "We know who the players are, we have a body. How are these punks beating us at this?"

Anyone with information concerning Phlisia's case is asked to call Stoffel at the Mesa County Sheriff's Office at 970-244-3265.