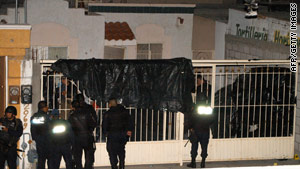 Police guard the house in Juarez, Mexico, where 14 people were shot to death on Friday night.
STORY HIGHLIGHTS
RELATED TOPICS

(CNN) -- The death toll from a shooting at a house party in the violence-plagued Mexican border city of Juarez has climbed to 14, state media reported Sunday.

The victims killed were between ages 14 and 30, Notimex said. Children as young as 7 and 11 were among the injured, the agency reported.

Salas said authorities were investigating the backgrounds of all the victims.

Mexico's National Human Rights Commission said it was sending representatives to the neighborhood, which was near another home where cartel gunmen stormed a house party in January, killing 15 people. Most of the victims in that shooting were youths who had no ties to organized crime.

Investigators said the January shooting was a case of mistaken identity caused by bad intelligence. It sparked widespread outrage in the violent border city, including calls for Mexican President Felipe Calderon to resign.

In a news conference Saturday, the country's deputy interior minister told reporters federal authorities will maintain the security strategy they are developing with state officials.

"We are here to address this deplorable and condemnable acts, and to ensure full support to local authorities investigating these unfortunate events," deputy interior minister Juan Marcos Gutierrez said, according to Notimex.