By Lena Jakobsson, In Session 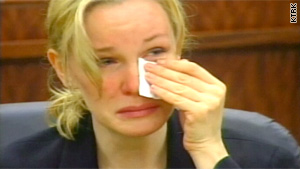 Susan Wright claims that she stabbed her husband to death after years of abuse.
STORY HIGHLIGHTS
RELATED TOPICS

Houston, Texas (CNN) -- A Texas woman who was sentenced to prison for stabbing her husband more than 200 times may have a chance at probation as a second jury reconsiders her sentence.

Once dubbed the "blue-eyed butcher" in news accounts, Susan Wright is serving a 25-year sentence for stabbing her husband, Jeffrey, to death in 2003. During her murder trial the following year, Harris County District Attorneys alleged that Wright tied her husband to their bed during a seduction, dripped hot wax on his body and killed him.

An appellate court upheld Wright's conviction of first-degree murder but set aside her sentence, finding that her attorneys failed to do their job in the penalty phase of the case.

The mother of two from Houston faces a wide range of sentencing options, from probation to life in prison. The decision rests in the hands of a new 12-person jury.

Wright's appellate attorney, Brian Wice, argued that her original team ignored crucial witnesses who would have supported Wright's claim of abuse at the hands of her husband. A psychiatrist who treated Wright after the stabbing, an expert on Battered Woman Syndrome, and a former girlfriend of the victim who had pressed assault charges against him were all known and available to the defense but inexplicably never testified, Wice argued in his appeal.

Wice attributed his client's sentence to rookie defense attorneys who were "steamrolled" by a veteran prosecutor.

Former Assistant District Attorney Kelly Siegler, who tried the case, propelled the trial into the media spotlight with a dramatic courtroom re-enactment of the stabbing on the Wrights' marital bed.

Straddling a tied-down colleague on the actual bloodstained mattress, weapon in hand, Siegler demonstrated the State's version of the killing.

Prosecutors took a more measured approach this week, avoiding sexual innuendo but maintaining that the victim was tied to the bed during the attack.

Explicit photographs of the victim's wound-riddled body were displayed for jurors, with defense attorney Jonathan Munier describing the man as a "leaking sieve" from injures ranging from his head to his genitals and legs.

Wolf also said cocaine was found in the victim's system, and several witnesses testified to his occasional drug use, which defense attorney say may have rendered him aggressive.

Wright testified in 2004 her husband regularly abused her and that she experienced a break with reality when the stabbing occurred.

Prosecution witnesses this week also testified to the defendant's apparent clean-up of the scene and elaborate lies during the six days leading up to the discovery of her husband's body.

The 34-year-old was found buried in the backyard of the couple's home. The family dog had partially unearthed the remains and chewed off much of the victim's left hand.

Wright, flanked by new attorneys, cried often during the testimony this week but smiled at the mention of her two children, now in the care of her former in-laws.

The defense case will continue Monday.