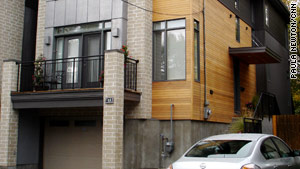 Ottawa, Canada (CNN) -- A Canadian air force colonel and pilot who was entrusted with flying Queen Elizabeth across Canada has pleaded guilty to charges of murder, rape and dozens of sexually motivated break-ins.

Police say Col. Russell Williams confessed that he murdered two women, sexually assaulted two others, and broke into dozens of homes in search of women's lingerie. He was arrested in February after being pulled over at a police roadblock near the home of Jessica Lloyd, one of his murder victims.

He pleaded guilty in an Ontario courtroom on Monday, sparing victims and their families weeks of gruesome testimony.

The country is now bracing for victims' impact statements during the sentencing phase. Lurid details of how the colonel video-recorded and photographed his victims and saved this evidence as "trophies" are expected to be aired.

A portrait of Williams as a merciless sexual predator is beginning to emerge. Many are wondering how a man trusted with the country's most sensitive military secrets could have, for so long, kept so many secrets of his own.

"Down deep it's still hard to believe it, that it's the same guy. But we've accepted it. It doesn't make any sense at all for those that knew him," said George White, a neighbor and friend of Williams for 14 years.

"I think there's two personalities there," added White, who said that the colonel kept many details of his life to himself but was always very friendly and a good companion. He described a man who was an avid fisherman and jogger, and someone who was the consummate professional at work.

But White said that in hindsight it was strange that Williams never spoke of his family or his past.

"He was extremely secretive. We never knew anything about his family till after the fact. He never divulged anything. But that's all in hindsight, of course," he said in an interview with CNN.

Williams divided his time between his home in Ottawa and a country cottage in southern Ontario, both of which he shared with his wife, Mary-Elizabeth Harriman.

In legal evidence filed as part of a civil suit, Mary-Elizabeth Harriman said she had no idea of the crimes her husband had committed and described herself as being devastated by what she had learned.

White said he took the time to write her on behalf of their mutual friends.

"I sent Mary-Elizabeth a letter, a letter on behalf of our small group that sat together every evening for coffee and that. I sent her a letter, explained that we were her friends, we were there to stand by her," he said. "Never heard back from her."

No one seems to have had any idea that the colonel was leading a double life. For many, to try to figure out what could have triggered such a deadly spree of sexual attacks has been a nagging mystery.

Most troubling for victims and their families is the great lengths police say Williams went to to preserve the video, pictures and mementos from his crimes. It seems to have been a consuming obsession for the highly decorated military commander.

Police say dozens of these "trophies," along with other souvenirs of his crimes, were hidden and even catalogued in his upscale Ottawa home.

Despite his confession, Williams has so far given no indication as to what could have driven him to such bizarre and cruel behavior. Victims were subjected to hours of sexual torture and made to pose for video and photographs, usually while blindfolded and bound.

"Unanswered questions: How, why, when, where, everything," said White, who added that despite Williams' guilty plea, "I'm sure we'll never know."