2 found guilty of hate crimes related to death of immigrant 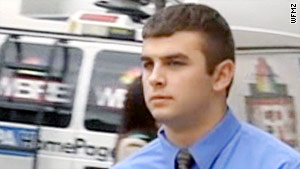 Scranton, Pennsylvania (CNN) -- Two men on trial in a Pennsylvania federal court in connection with the beating death of an undocumented Mexican immigrant have been found guilty on all counts, including hate crimes.

Derrick M. Donchak, 20, of Shenandoah, and Brandon J. Piekarsky, 18, of Shenandoah Heights, had previously been acquitted of murder charges in state court and convicted of simple assault.

But Donchak and Piekarsky were charged in federal court with hate crimes and depriving Luis Ramirez of his civil rights. Donchak also was accused of trying to cover up the July 12, 2008, crime.

"Four people attacked one person because of his race and because they didn't want people like him living in their town," prosecutor Myesha K. Braden said during her closing argument.

Witnesses testified that racist language was used before and during the attack and that Ramirez was kicked in the head repeatedly after falling down. The defendants, they said, didn't want immigrants in their neighborhood and repeatedly ordered Ramirez to leave.

Lawyers for the defendants said that the encounter had been no more than a fight fueled by testosterone and alcohol. William Fetterhoff, a lawyer for Donchak, said Ramirez chased one of the men.

The all-white jury deliberated on the case for approximately six and a half hours before reaching a verdict. Both men face up to life in prison. Sentencing was set for January 24, and the judge denied a motion for bail, calling their crime "a crime of violence."

Donchak's head dropped as the verdict was read. His parents wept.

"We're going to be OK," said Piekarsky's mother, Tammy. "We will appeal."

Nestor, Moyer and Hayes are scheduled to go to trial in January. Nestor, who faces charges in an unrelated extortion case, has resigned.

U.S. District Judge Richard Caputo, who presided over the Donchak/Piekarsky trial in Scranton, is slated to preside over the officers' trials in Wilkes-Barre.

Crystal Dillman, the mother of Ramirez' two children, said she was "ecstatic" with the verdict.

"It's nice to know that there is some justice for Luis," she said.

"I won't completely move on until the federal trial of the police officers is done," she said, "until it is proven that there was a conspiracy to stop justice."

Ramirez' mother, in Mexico, is "in shock but relieved and happy," Dillman said, but the couple's two children "are not past this."

"They are coming to grips with the fact that their father is dead," she said. "They don't understand where their father went and why he'll never come home. They will never comprehend this."

Donchak and Piekarsky were tried on state charges in May 2009 and convicted of simple assault and alcohol-related offenses. County Presiding Judge William E. Baldwin sentenced Donchak to six months and one week and Piekarsky to 23 months. Both are currently on parole.

"This jury's verdict demonstrates that violence aimed at preventing people from living in America because of their race, national origin, or ethnicity is intolerable," said Thomas E. Perez, assistant attorney general for civil rights in the Department of Justice. "As this case illustrates, the Civil Rights Division will vigorously enforce the rights of every person who lives in this country to do so free of racially based violence and intimidation."