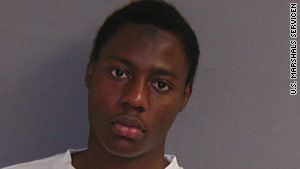 Attempted bombing suspect Umar Farouk AbdulMutallab fired his lawyers back in September. He will represent himself.
STORY HIGHLIGHTS

U.S. District Court Judge Nancy Edmunds scheduled another pretrial conference hearing for January 12, 2011, enough time for Anthony Chambers, the standby counsel for Umar Farouk AbdulMutallab, to examine the documents. She also set a 120-day window for motions to be entered.

AbdulMutallab, the British-educated son of a Nigerian bank executive, is accused of trying to set off a bomb hidden in his underwear aboard a plane from Amsterdam, Netherlands, to Detroit on December 25.

In September, AbdulMutallab decided that he no longer wanted to be represented by federal defenders and would act as his own attorney. Edmunds granted his request and appointed Chambers to be his standby counsel in case he needs help at any point in the proceedings.

Speaking to reporters outside the courtroom, Chambers said the case will be treated like any other.

"We're going to review it and make the decisions as we go along," he said, noting it is unusual for him to be appointed standby counsel.

He wouldn't discuss anything regarding meetings, but he said the discovery access is important "so we can review the case to determine what should happen and how things should transpire."

AbdulMutallab faces six federal charges, including attempted use of a weapon of mass destruction and willful attempt to destroy an aircraft. He has pleaded not guilty to charges of trying to blow up the Northwest Airlines plane.

Chambers said AbdulMutallab's family is "very supportive" of him.

AbdulMutallab is not the first high-profile terror suspect who has requested to represent himself in a U.S. court. Zacarias Moussaoui, the first man charged in connection with the September 11, 2001, attacks, similarly asked and was allowed to act as his own counsel.

A judge later stripped him of that right after warning Moussaoui to stop filing what she called frivolous and disrespectful motions.