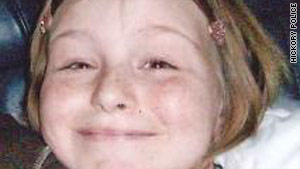 (CNN) -- An Amber Alert has been issued after a 10-year-old girl was reported missing from her Hickory, North Carolina, home on Saturday.

Zahra Clare Baker was last seen sleeping in her bedroom about 2:30 a.m., according to Clyde Deal, deputy chief of the Hickory Police Department. She was reported missing Saturday afternoon.

"We are conducting interviews now and following up on the leads we have so far," Deal said. "As of right now, we haven't ruled anything out. We're exploring all possibilities."

Zahra is described as white, measuring about 5-foot-1 and weighs 85 pounds. She has a prosthetic device below her left knee and is hearing-impaired.

Anyone with information can call the Hickory Police Department at 828-328-5551.