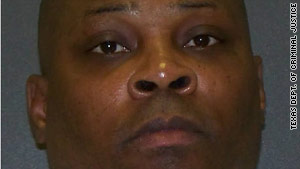 Lawyers for Gayland Bradford say he is mentally deficient, with an IQ of about 68.
STORY HIGHLIGHTS

Washington (CNN) -- The Supreme Court has issued a temporary stay of execution for Texas death row inmate Gayland Bradford, who was convicted of the 1988 murder of a Dallas convenience store security guard.

The inmate's lawyers say he is mentally deficient, with an IQ of about 68. The high court has banned executions of the mentally deficient but has established no clear standard of determining who is in that category.

The court said if this "petition for a writ certiorari" is ultimately rejected by the court in coming days or weeks, this stay of execution would immediately expire.