By Beth Karas, "In Session" 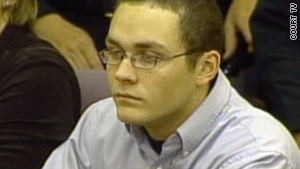 (CNN) -- A young man who was 14 when he shot and killed his family on a New Mexico ranch owned by newsman Sam Donaldson has been freed, a spokeswoman for the state's youth and families agency said Saturday.

Cody Posey had just finished the eighth grade when he was arrested on July 7, 2004, in connection with the slayings of his father, stepmother and stepsister.

He confessed to the slayings, but said he snapped after years of physical and psychological abuse. He said he fatally shot his father, Paul Posey, 34, stepmother, Tryone Posey, 44, and stepsister, Mairlea Schmid, 13, and then used a backhoe to bury their bodies inside a manure pile.

The state asked the court to impose the maximum adult sentence, life without parole. But Judge James Waylon Counts ruled that it was possible Posey could be rehabilitated and sentenced him as a juvenile offender. Once he reached 21, he could no longer be held as a juvenile and was free to go.

Posey turned 21 on Saturday, according to his uncle, Carl Clees.

"He has a bright future. I see no problems with him progressing and getting on with his life like the rest of us," Clees said.

While in custody, Posey obtained his high school degree and completed nearly two years worth of college credits, Clees said, adding that he had no disciplinary issues and served as a mentor to other youths.

The Posey family lived and worked on the Chavez Canyon Ranch in Hondo, New Mexico, owned by Donaldson, a former anchor at ABC News. It was Donaldson who discovered the bloody scene inside the Poseys' home on July 6.

Donaldson was the first witness to testify at Posey's trial in Children's Court in 2006.

Posey's defense called 40 witnesses, including ranch hands who claimed they witnessed years of physical and psychological abuse by Posey's father.

Testifying in his defense, Posey described the night before the shootings.

His father and stepmother summoned him to the master bedroom and tried to force him to have sex with his stepmother, he testified. When Posey refused, his father burned him with a heated metal rod, he testified.

Posey said he ran from the room. He was still reeling from the encounter the next morning when his father slapped him while he was doing chores.

He said he decided to grab a gun from Marilea's saddle bag, and then shot each member of his family in the head.

In his confession, Posey admitted that after burying the bodies in the manure pile, he tried to stage the scene to look like a burglary. He said he took the family's pickup and visited friends, where he spent the night, lying about where his family was.

Donaldson told jurors he called the police soon after finding a large amount of congealed blood in the house and a "disturbing, red, dry swath" across the floor where the bodies had been dragged.

The bloody trail and backhoe tracks led police to the manure pile where the badly decomposed bodies were discovered.

Although the shootings occurred within seconds of each other, the jury returned different verdicts for each victim, siding in part with Posey's claims of abuse.

But now, Posey just wants a fresh start, his uncle said. "I'm excited for him. I look forward to helping him as much as possible," Clees said.