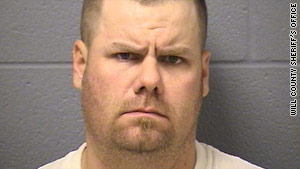 Brian E. Dorian, 37, of Crete, Illinois, is suspected of killing one man and wounding three others in a shooting rampage.
STORY HIGHLIGHTS

(CNN) -- A police officer arrested Friday in Will County, Illinois, has been charged with one count of first-degree murder in connection with a two-state rural shooting rampage that left one man dead, authorities said.

Brian E. Dorian, 37, an officer with the Lynwood Police Department, will probably face other charges, said Will County State's Attorney James W. Glasgow. In addition to the fatality, three people were wounded in the spree, which occurred south of Chicago.

At a news conference Friday, authorities declined to provide a possible motive for the shootings, which occurred Tuesday.

He is being held on a probable cause warrant, and bail was set at $2.5 million, said Charles Pelkie, a spokesman for the Will County state's attorney's office.

"It's always law enforcement's worst nightmare when someone in the law enforcement community chooses to break the law," Glasgow said. "It's critical that we act no differently in investigating a policeman than we would any lay person. No professional courtesies. No special treatment."

"My son would never do that. They don't have the shooter. The shooter is still out there," John Dorian told CNN affiliate WLS in Chicago.

Dorian, who WLS said has been on medical leave for an injured shoulder the past year, was taken into custody at his residence, said authorities, who added that evidence is being analyzed.

A woman left the residence before the arrest. Dorian had four pit bulls with him when he was arrested, said Will County Sheriff Paul Kaupas.

The shootings began about 10:30 a.m. Tuesday at a construction site near Beecher, Illinois. The gunman killed one worker at the site and wounded two others, police have said.

An hour later and about 10 miles away in Lowell, Indiana, authorities believe the same gunman opened fire again -- this time on a local farmer. Keith Dahl was shot in the left shoulder, arm and elbow, and then was robbed.

Dahl told Lake County (Indiana) Sheriff's Detective Robert Martinez that the gunman approached him on his farm and started a conversation about bees before beginning to shoot.

The gunman was believed to be using a revolver -- possibly a Colt .38 caliber or .357 Magnum -- because no shell casings were found at either scene, Lake County Sheriff Rogelio "Roy" Dominguez said earlier.