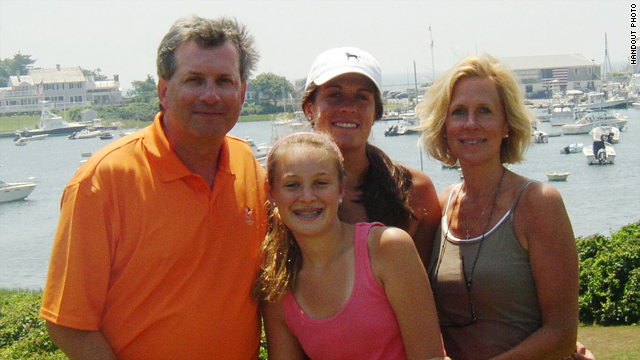 Dr. William Petit in a family photo with daughters Michaela and Hayley, and his wife, Jennifer Hawke-Petit.
STORY HIGHLIGHTS

(CNN) -- A Connecticut man whose wife and two daughters were murdered in a 2007 home invasion will not testify at the sentencing of the convicted killer, he said.

Dr. William Petit has "regretfully decided" against testifying because he said Connecticut's law on victim impact statements is unclear and could provide convicts with grounds to appeal their sentences.

Announcing his decision in a statement Friday, Petit urged Connecticut's General Assembly to "promptly amend the law to guarantee ... the right of surviving family members of capital murder victims to present victim impact statements" at sentencing.

On Tuesday, a jury convicted 47-year-old Steven Hayes of capital murder in the deaths of Petit's family members. Prosecutors are seeking the death penalty.

On Friday, Petit said he would have preferred to make a statement at Hayes' sentencing.

"Unfortunately, however, our General Assembly has failed to enact an appropriately clear law to allow a victim like me the right to make a statement on behalf of myself and my family members during the course of a capital sentencing trial," his statement said.

"This lack of clarity in the law is a crippling disincentive to surviving family members of victims in capital murder cases to make a statement," Petit continued, because such statements could be construed to violate state law, giving a convict "a basis for appeal and possibly even a new sentencing trial."

Petit said Friday that the law fails to specify who may offer a victim impact statement or when the statement could be introduced.

Hayes was found guilty of 16 of the 17 charges against him in connection with the deaths of Jennifer Hawke-Petit and her two daughters, including nine counts of murder and capital murder and four counts of kidnapping. The jurors acquitted him of an arson charge in the burning of the family's home.

The killings took place in the New Haven suburb of Cheshire early on July 23, 2007.

Petit's and his wife's home was invaded in the middle of the night by Hayes and another man, Joshua Komisarjevsky, prosecutors say. Komisarjevsky will be tried separately.

"There is some relief, but my family is still gone," Petit told reporters after Tuesday's verdict. "It doesn't bring them back. It doesn't bring back the home that we had."

At the penalty phase, jurors will determine whether the mitigating evidence the defense is expected to present will outweigh the aggravating factors in favor of the death penalty. Judge Jon Blue set the penalty phase to begin October 18.

On Friday, Petit said that a victim impact statement should be a part of that process.

"Just as a capital murderer is permitted to seek to 'humanize' himself by presenting all manner of mitigating evidence about his own background and circumstances, the prosecution should also be permitted equally to 'humanize' the lives of a defendant's victims," his statement said.

This lack of clarity in the law is a crippling disincentive to surviving family members of victims in capital murder cases to make a statement.
--Dr. William Petit
RELATED TOPICS

During the trial, Jeremiah Krob, a Connecticut prison officer, testified he overheard Hayes confess to another inmate that he killed Jennifer Hawke-Petit.

Connecticut State Police Detective Anthony Buglione, who interviewed Hayes after the crime, has testified that the duo beat Petit bloody and left him in the basement.