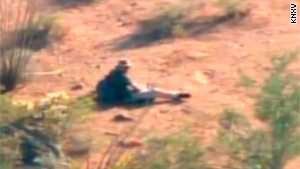 The deputy was shot in the left abdomen and suffered a superficial wound, law enforcement sources said at the time.
STORY HIGHLIGHTS
RELATED TOPICS

(CNN) -- An Arizona sheriff's deputy who said he was shot by a suspected drug trafficker was telling the truth, authorities said Friday, presenting evidence from a follow-up investigation provoked by a media report challenging the deputy's version of events.

"Many have suggested a conspiracy, [that] somehow our deputy shot himself," Pinal County Sheriff Paul Babeu said at a press conference Thursday. "People weighed in that weren't from Arizona ... and it put that question of doubt in the public's mind that there's something here to look at."

"This case is now closed and we're going to move on," he said.

In an article last month, The Phoenix New Times cited forensic experts who challenged the account of Deputy Louie Puroll, who said he was shot in the central Arizona desert from a distance by an illegal immigrant with an AK-47. Two experts were quoted by the New Times as saying the evidence suggested Puroll had been shot at very close range.

The Pinal County Sheriff's Office said Thursday that new testing on the bullet-torn shirt Puroll was wearing on the day of the April shooting had ruled out a close-range shot.

"The physical evidence, radio traffic, phone calls and now this gunshot residue testing completed by the Arizona Department of Public Safety all confirm [Puroll's] account of the events," the sheriff's office said in a statement.

The New Times allegations provoked the sheriff's office to reopen its investigation into the case "to maintain transparency," according to the sheriff's office statement, and "to prove without question that the weapon fired at Deputy Puroll was not a 'contact wound.' "

The office said that Puroll's shirt from the day of the incident was tested by the Arizona Department of Public Safety for "the presence of munitions residue, indicative of a close contact discharge."

The shirt had been preserved under seal in a bag in the Pinal County Sheriff's Evidence Room since the shooting, the sheriff's office said.

"The area around the hole was microscopically and chemically processed for the presence of gunshot residues," the statement said. "Bullet wipe was found which is consistent with the passage of a bullet; however, no gun power was detected."

"This testing further confirms that the gunshot wound was not a close contact shot as had been reported by the two doctors through a local media entity," the statement said, referring to The Phoenix New Times.

The tests were concluded on Thursday, the sheriff's office said.

Asked at Thursday's press conference if he was anxious about how the tests would come back, Puroll said no.

On April 30, Puroll contacted authorities after being wounded in the desert, Lt. Tammy Villar, a sheriff's spokeswoman, said at the time.

The deputy radioed that he had encountered five men, some wielding long guns and handguns, and said they were carrying a large amount of marijuana.

At one point the deputy lost radio contact with authorities, leading to a search by foot and by air for him and the shooter, according to CNN affiliate KNXV. Video from the scene showed that the deputy was located while sitting in desert brush, surrounded by cactus. He was able to walk to a helicopter, which airlifted him to a hospital.

The deputy was shot in the left abdomen and suffered a superficial wound, law enforcement sources said at the time.

The shooting came amid a national debate over Arizona's tough new immigration law, which allows police to demand proof of legal residency.

Arizona lawmakers say the law is needed because the federal government has failed to enforce border security with Mexico, allowing more than 450,000 illegal immigrants to move into the state.

Since the shooting, Sheriff Babeu appeared in ads about stopping illegal immigration on behalf of Sen. John McCain, R-Arizona, who defeated a primary challenger in August.

"Deputy Puroll is the victim of a shooting and that focus has been lost," Babeu said Thursday. "The ringer that he his wife and his entire family has been put through because of this is unacceptable."