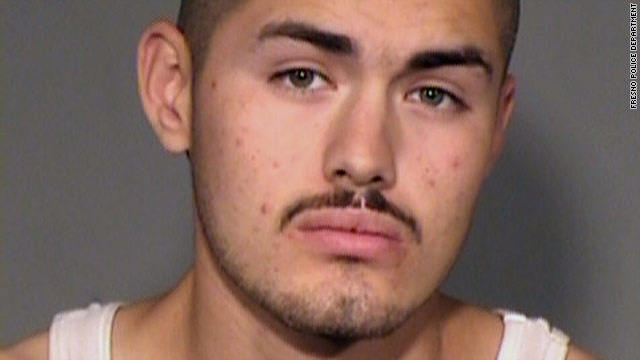 Check out local reports on CNN affiliates KFSN-TV and KSEE-TV.

(CNN) -- The remarkable recovery of an abducted 8-year-old girl in Fresno, California -- which combined solid police work with the efforts of good Samaritans -- turned bittersweet Tuesday when authorities said the victim had been sexually assaulted.

Still, the fact that the girl was back home after the harrowing ordeal brought thanks from her parents during a news conference Tuesday afternoon.

Speaking through an interpreter, the girl's father said he was "very happy that his daughter is home."

Police praised citizens, the media and good Samaritans as "heroes" on Tuesday, saying their efforts led to recovery and the arrest of the man, a suspected gang member, accused of taking her.

"It is truly a miracle of God that she is with us today," Police Chief Jerry Dyer said.

The girl was recovered Tuesday, hours after authorities said she was forced into a pickup truck at a Fresno apartment complex by a man who had approached a group of children playing. 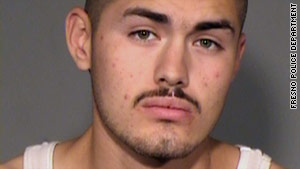 She was taken to a hospital for an examination, Dyer told reporters, initially saying the girl was "frightened" and "traumatized" but in good condition. Police indicated later she was the victim of sexual assault in a wooded area, perhaps out of town, before the motorist drove back to Fresno.

CNN does not identify possible victims of sexual assaults.

Watching the girl and her mother reunite, Dyer said, was "the highlight of my career."

Police identified the suspect as Gregorio Gonzalez, 24, of Fresno. Charges against him will include kidnapping, false imprisonment and sexual assault. Gonzalez, who lives with his grandparents, is a member of the Bulldog gang, has been arrested for possession of a sawed-off shotgun and was on probation for felony domestic violence, Dyer said.

About 7 a.m. (10 a.m. ET), a person described by Dyer as a good Samaritan told police he was driving when he saw a truck similar to a description of the suspect's vehicle given by authorities. The person, who had watched the news and was familiar with the case, began to follow the truck, Dyer said.

The driver initially said he only saw a man in the truck and no one else, but within a few minutes saw a child stick her head up. "He realized right then and there he had the suspect vehicle," Dyer said.

The man pulled in front of the truck and cut it off, and the young girl "took the moment of opportunity, opened up the passenger door, and jumped out and ran," he said. A second good Samaritan stayed with the girl, Dyer said.

The driver pursued the pickup truck and was able to obtain a partial license plate number, which he gave to dispatchers, the chief said.

CNN affiliate KFSN later spoke with Victor Perez, who said he was the motorist who followed the suspect's truck. "I thank God that he put me here to help out that little girl."

About 40 minutes later, the California Highway Patrol received a report of a truck matching the vehicle description parked behind a church, Dyer said. Responding officers were not able to find the truck at the location and contacted the tipster, who advised them it had been driven away. It was later found parked nearby, behind an apartment complex.

The officer initially thought the truck was not occupied, but a man raised up as the officer exited his car, Dyer said. The unarmed man was taken into custody without incident, he said.

A witness has identified the man as the person at the abduction scene, the chief said.

"We beat the odds today," Dyer said, adding that often abduction victims aren't found until it is too late. Of those killed in an abduction, 74 percent are killed in the first three hours, he said. 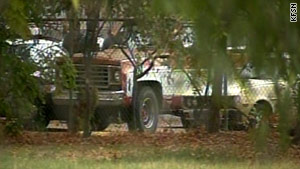 The suspect was tracked in this truck by citizens and police. One car pulled in front of the truck and the girl jumped out.

"I want to say thank you to the citizens of Fresno and the good Samaritans," he said. "They are heroes." He also thanked the media for their assistance.

Authorities were notified of the incident about 8:30 p.m. Monday, Dyer had said earlier. A man reportedly drove up to an apartment complex where a group of children were playing, approached two girls and attempted to lure them into his truck. A younger girl, 6, walked away, Dyer said, but the victim began walking with the man.

Two witnesses nearby, a man and a woman, saw what was going on and yelled at the children to get away from the vehicle and the man, Dyer said. But before the girl had time to react, he said, the man grabbed the girl, pushed her into the driver's side of the pickup and sped off with the truck's headlights off.

The girl's mother got into a car and tried to chase the truck down, but was unsuccessful, Dyer said.

Police had received a report shortly before the incident of a man with a similar description and vehicle exposing himself to young girls nearby, the chief said. The man got into a pickup and drove away with his lights out, Dyer said. The mother of one girl chased him on foot but did not catch him.

The vehicle was described as being a late 1970s or early 1980s model Ford or Chevy pickup, either dark brown or reddish-brown in color, Dyer said earlier. The two-door pickup reportedly had a 6-inch-wide white stripe on the side, and was spotted on policing cameras from the area, he said.

The police chief said the man attempted to entice the girls into the truck by promising them something, but would not say what. CNN affiliate KFSN reported the man spoke in Spanish and told the children that he would take them to the Dollar Store and buy them toys if they got into the truck.

A man who was detained earlier Tuesday after a witness tip was questioned and released; authorities believed he was not involved.

"This is truly the first stranger abduction kidnapping that I believe has occurred at least since I have been the chief," Dyer said. Such incidents are "very rare in law enforcement today, fortunately."

"This is a remarkable accomplishment for an entire community," she said. "This is a relatively happy ending to an otherwise tragic tale."