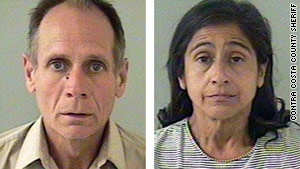 Phillip and Nancy Garrido face 18 counts, including kidnapping, rape and false imprisonment. They are also accused of possessing child pornography. Both had previously pleaded not guilty to 29 felony counts in the case.

Dugard was 11 years old when she was snatched in 1991 from the street in front of her home in South Lake Tahoe, California. Authorities say the Garridos held Dugard in a hidden compound behind their home for 18 years.

She was 29 when she was found in August 2009 at the Garridos' home in Antioch, about 120 miles from her house.

Nancy Garrido's lawyers on Friday entered a plea of not guilty on her behalf to the revised charges. Proceedings against her husband have been suspended to determine whether he is mentally competent to stand trial.

The indictment, filed September 21 in El Dorado Superior Court, allows the prosecution to circumvent a preliminary hearing, at which Dugard might have testified in open court. The next hearing in the case is scheduled for November 4.

The indictment came to light during a scheduled hearing Friday, at which the Garridos were present. They sat just a few chairs apart and showed little emotion as they spoke to their lawyers and listened to the judge.

"There's a number of reasons why we might use a grand jury," El Dorado County District Attorney Vern Pierson later told reporters outside the courthouse. "One obvious reason is that sometimes given the publicity in a case, it's a better way to get the case to a final conclusion and move it along to trial."

Stephen Tapson, Nancy Garrido's attorney, said he did not imagine a trial would start before the end of next year. He also said he believed that Dugard testified before the grand jury.

Garrido, a registered sex offender on parole at the time of his arrest, is accused of fathering two daughters with Dugard during her captivity.

Officials have said Dugard does not want to speak to Garrido or his attorneys, and authorities have tried to keep her location a secret.